Avatar 2 Trailer: Who Is the Human Kid Character? 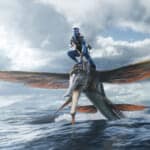 The first trailer for “Avatar: Way of the Water” has officially been released, bringing fans back to Pandora and the Na’vi people. But uh, there’s definitely a human running around with the blue creatures, so who is he?

His name is Javier “Spider” Socorro. Played by Jack Champion, Spider was actually born on Hell’s Gate (the human base on Pandora in the first film), but was rescued and adopted by Jake (Sam Worthington) and Neytiri (Zoe Saldana). That said, there was apparently a bit of friction in that decision.

“Jake took him in but Neytiri always saw him as one of the people who destroyed her home and killed her father,” producer Jon Landau told Empire back in December. “So you have all these dynamics playing out.”

Spider has three siblings, all of them being Na’vi: Neteyam (Jamie Flatters), Lo’ak (Britain Dalton), and Tuktirey (Trinity Bliss).

“Jake comes from the human world, Neytiri from the Na’vi world. So, they’re like a modern mixed-race couple, raising kids who perhaps feel they don’t belong to one world or another,” Landau continued.

Set more than a decade after the events of the first film, the sequel is set to tell the story of the Sully family, the trouble that follows them, the lengths they go to keep each other safe, the battles they fight to stay alive, and the tragedies they endure.

“I know one thing: wherever we go, this family is our fortress,” Sully says at the end of the trailer.

James Cameron returns to direct “Avatar: Way of the Water,” based on his 2009 blockbuster hit “Avatar,” taking fans deeper into the visually stunning world he created. Along with Worthington and Saldana, Sigourney Weaver and Stephen Lang will also return from the original film. “Avatar: Way of the Water” will also bring in newcomers Cliff Curtis, Joel David Moore, CCH Pounder, Edie Falco, Jemaine Clement and Kate Winslet.