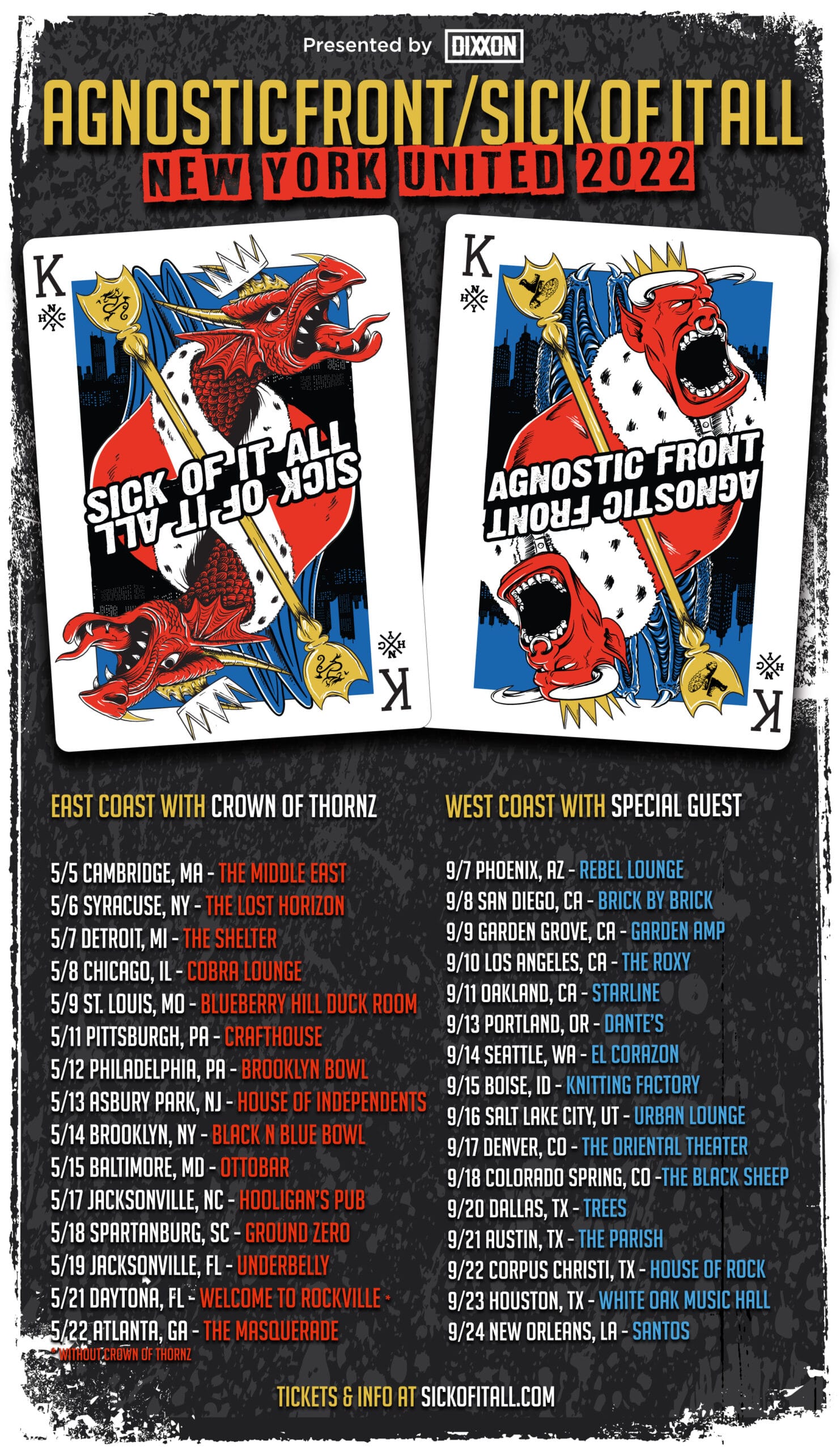 Agnostic Front, Sick of It All, Crown of Thornz
Friday, May 6th, 2022
The Lost Horizon, Syracuse, NY

Veteran NY hardcore bands Agnostic Front, Sick of It All and Crown of Thornz made a stop at the intimate Lost Horizon in Syracuse, NY on May 6th as part of the co-headlining “New York United” tour. Originally slated for Spring 2021 but canceled due to the Covid-19 Pandemic the tour brings together three of the biggest names in hardcore music.

Taking the stage first were Queens NY natives Crown of Thornz. The Danny Diablo (Skarhead) fronted group wasted no time letting the audience know that they were taking no prisoners as the band ripped through songs like “Head Check”, “Icepick”, “Mental Masquerade” and “Juggernaut”. Diablo and company worked the crowd to a steaming simmer often taking time to share the mic with fans (many of whom didn’t miss a beat filling in the correct lyrics) energizing the room further before bringing their set to a close. Sick of It All would be tasked next with keeping the nights energy going and they quickly got to it by launching into the tracks “Injustice System” and “Clobberin’ Time” both from the band’s debut 1989 release “Blood, Sweat and No Tears” before taking a brief pause which allowed vocalist Lou Koller to catch his breath and to address the Syracuse crowd. As the set stretched on through songs like “Good Lookin’ Out”, “World Full of Hate” and “Pushed Too Far” Bassist Craig Setari, guitarist Pete Koller and drummer Armand Majidi pummeled the audience song after song with impressive cohesiveness and a percussive attack which obliterated your senses.

Hardcore legends Agnostic Front would close out the evening in signature NYHC style kicking off their twenty plus song set with the title track from their 1984 debut “Victim in Pain”. Vocalist Roger Miret fresh off a bout with cancer in late 2021 commanded the audience’s attention over the course of the night pausing only briefly to share his thanks for the support during recent health troubles and to announce the start of tracks like “New Jack”, “ For My Family” and “Crucified”. Guitarist and founding member Vinnie Stigma sneered, snarled, and smiled at the crowd as he made his way around the cramped stage pausing from time to time to address the crowd in his thick NY accent which garnered loud applause and cheers of “STIGMA, STIGMA” . The band closed out the evening with a spot-on rendition of the classic Ramones song “Blitzkrieg Bop”. The punk staple had those in the crowd expelling any energy they may have had left before being basked in the grow on the house lights which signaled the end of the evening.

Despite reschedules, cancellations and a very serious medical scare the power of hardcore persevered as fans are now able to see some of the biggest names in the genre back up where they belong. All three bands give their all to make sure no one goes away unhappy. With East Coast dates running through May and a West Coast leg of the tour kicking off in September do yourself a favor and grab a ticket to one of these shows and get in the pit!