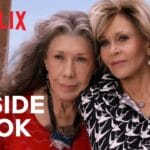 To celebrate the end of “Grace and Frankie,” Netflix is ​​giving us some extra laughs.

The streamer released a Season 7 blooper reel on Monday, which you can watch above. The video features gaffes from missed lines to blundered fight choreography.

Of course, many of the best moments occur between Lily Tomlin and Jane Fonda as they joke around in between takes — and sometimes during them.

“Ugh, I’m sorry,” Tomlin laments at one point, sinking into a chair. “I forgot my lines. And it’s not because I’m old! It’s because I never learned them.”

The final episodes of the series debuted on Netflix April 29.

Here’s the logline for the final season: “them for… each other. Both sparring partners and partners-in-crime, Grace and Frankie formed an unlikely and unbreakable bond as they faced uncertain futures head-on, and hand-in-hand. They’ve laughed together, raised together, did shrooms together, and twice-over became successful entrepreneurs together. A history-making 94 episodes later, Grace and Frankie continue to show themselves, their families, and their fans what it means to live life to the fullest, fearlessly and unapologetically. Here’s to seven seasons of laughs, tears, mood-enhancers, and good vibes. And, as Grace and Frankie would say, f— it. This may be their final chapter, but they’re just getting started.”

“Grace and Frankie” is produced by Skydance Television.