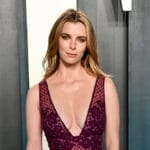 Jake McDorman has joined the cast of “Mrs. Davis” at Peacock.

McDorman will play the ex-boyfriend of Betty Gilpin’s character in the original series, which finds Gilpin playing a nun who battles an all-powerful artificial intelligence.

The upcoming drama series comes from executive producers Tara Hernandez (“Young Sheldon,” “The Big Bang Theory”) and Damon Lindelof (“Watchmen,” “The Leftovers”), and is described by the streamer as “an exploration of faith versus technology — an epic battle of biblical and binary proportions.”

McDorman’s character is described by the streamer as having “a personal vendetta against the Algorithm.”

The actor previously led the CBS series “Limitless” and the ABC Family drama “Greek,” and recently had roles in Hulu’s “Dopesick” and the Disney+ series “The Right Stuff,” the latter of which was canceled after one season.

Hernandez is the showrunner and co-writer with Lindelof. Joining them as an EP is director Owen Harris (“Brave New World”). Harris will also direct multiple episodes. Eugene Kelly is also an EP.

The show is from Warner Bros. Television, where Lindelof and Hernandez have overall deals.