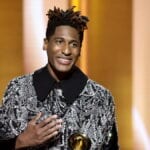 Kendrick Lamar is back in a big way with a new single, “The Heart Part 5” and an accompanying music video featuring deepfakes of the faces of Will Smith, Kanye West, Kobe Bryant and other famous Black men.

Co-directed by Lamar and Dave Free, the video seems deceptively simple at first. It opens with a quote attributed to Oklama, a name that Lamar has gone by in recent months. “Yo soy. All of us” appears on a black screen before Lamar, wearing a white T-shirt and black bandana around his neck, begins rapping in front of a red wall.

“As I get a little older, I realize life is perspective and my perspective may differ from yours,” the Pulitzer Prize-winner says at the top of the song. “I want to say thank you to everyone that’s been down with me. All my fans, all my beautiful fans, anyone who ever gave me a lesson. All my people.”

As the song goes on, Lamar’s face morphs into that of other Black men who have famously made headlines – beyond Smith, West and Bryant he takes on the appearance of OJ Simpson, Nipsey Hussle, and Jussie Smollett. Complex notes that the face shifts are timed to specific lyrics, such as West’s at “ain’t no photoshoppin’/friends bipolar” and Hussle’s during the line “I’m in Argentina wiping tears full of confusion,” referencing where Lamar was performing when the late rapper died in 2019.

You can watch the remarkable video at the top of this post.

The video credits its deepfake technology to Deep Voodoo, the studio founded by “South Park” creators Trey Parker and Matt Stone. In late 2020, the company produced the viral video series “Sassy Justice” featuring a character named Fred Sassy, ​​a doppelgänger for Donald Trump created using deepfake technology. Played by their collaborator Peter Serafinowicz, Sassy interacts with figures who bear remarkable resemblances with Al Gore and Mark Zuckerberg, among others, all the while ringing the alarm about the dangers of deepfake technology. 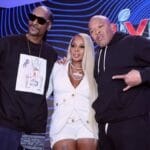 Now, Deep Voodoo’s team of technicians and artists have slowed their talents to the many startlingly realistic face swaps in “The Heart Part 5.”