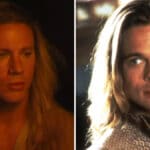 Sandra Bullock and Channing Tatum’s adventure rom-com “The Lost City” will premiere on Paramount+ May 10 in the US and Canada, with a streaming release overseas later this year, it was announced on Monday.

Directed by Adam and Aaron Nee, “The Lost City” stars Bullock as the successful but weary romance novelist Loretta Sage and Tatum as her gorgeous but stupid cover model Alan. When Loretta is kidnapped by an eccentric billionaire (Daniel Radcliffe) to help find a lost treasure, it’s up to Alan to save her as they are thrust into an adventure straight out of her novels by her. Da’Vine Joy Randolph, Oscar Nuñez, Patti Harrison Bowen Yang and Brad Pitt also star.

With a reported budget of $68 million, “The Lost City” was a modest box office success with $94.3 million grossed domestically and $162.7 million worldwide. Along with MGM’s “Dog,” another Channing Tatum film, “The Lost City” has been pegged as a spring release that has increased turnout among female moviegoers after a 2021 box office dominated by younger adult men buying tickets for the biggest blockbusters.