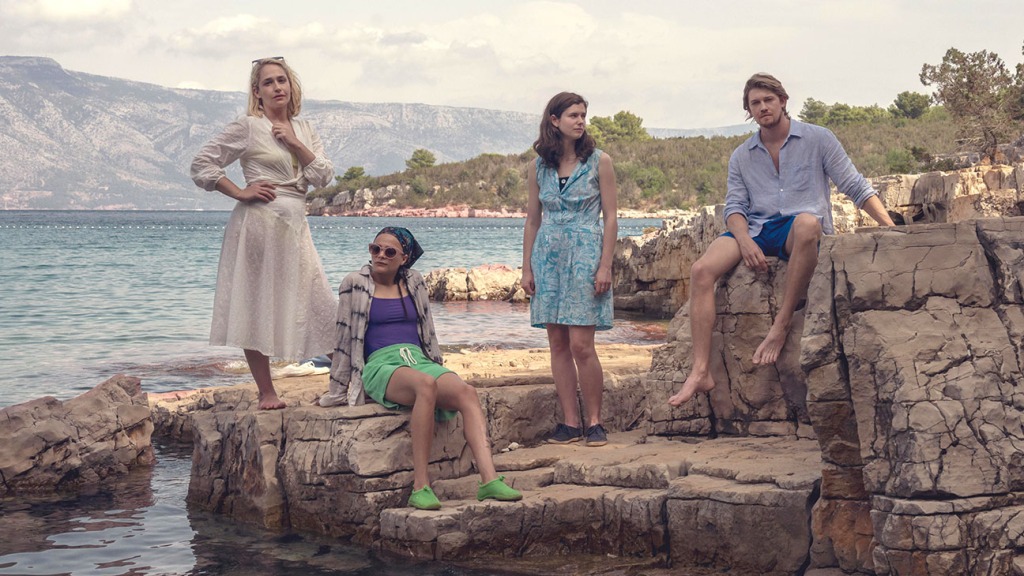 Frances (Alison Oliver), the protagonist of Conversations With Friends, is not the emotional type. We know this because we can see how she guards her expressions de ella, holds her tongue, deflects well-meaning questions with stoic indifference — but also because she keeps telling people that she is n’t, and being told by them that she is n’t. Even when she cries during sex, she shrugs it off as a meaningless physical reaction. “It’s not real crying,” she insists while wiping away her tears.

But as the weeping suggests, she has great reservoirs of feeling buried away, unacknowledged and unprocessed, and they tend to spring leaks in inconvenient, unpredictable, sometimes destructive ways. Conversations With Friends charts Frances’ halting journey toward bridging the disconnect between theory and practice, head and heart, with patience and a perceptive eye for detail. But it too often tilts toward the same sense of reserve that its heroine does, resulting in a series that’s elegant and sensitive, but perhaps too cool for its own good.

Elegant and restrained, to a fault.

At one of their performances, the girls meet and befriend Melissa (Girls‘ Jemima Kirke, perfectly cast), a 30something writer of some renown, and soon become enmeshed in her older, posher social circle — which includes Melissa’s handsome actor husband Nick (Joe Alwyn). Her mutual infatuation with Frances soon evolves into a full-fledged affair that forces her to reconsider her relationships with the world around her, but also with herself.

Conversations With Friends is frequently lovely to look at, in a measured way that reflects the way the characters look at one another — intently, while trying to seem casual. The camera rarely feels intrusive, but it also misses nothing. It notes the glint of Ella’s Nick’s wedding ring as he runs his hand through her hair, or Ella’s Frances’ self-conscious impulse to fix a spaghetti strap when Nick addresses her in front of Melissa. And it notes the way other characters note these, which is often with an air of stubborn nonchalance.

If Conversations With Friends excels at capturing the finer details of their interactions, however, it’s somewhat less convincing at conveying the warmth or heat coursing underneath them. In part, it’s a problem of chemistry. In the similarly understated normal people, Marianne (Daisy Edgar-Jones) and Connell (Paul Mescal) felt drawn together by a force so magnetic it seemed inevitable. While Frances’ attraction to Nick may not have the same stirring sense of romance, it’s still a connection that we’re meant to understand consumes her to the extent that, as she admits to him at one point, “I don’t think I thought about reality or consequences.”

But Oliver and Alwyn generate only mild friction together, even when their unclothed bodies are writhing against each other to gentle soundtracks in soft sunlight. There’s a touch of tenderness between them, but little of the desperation needed to propel their story forward. It doesn’t help that the baby-faced Alwyn reads as slightly too young for the role of Nick, thus blunting what in the book comes across as the thrilling appeal of a more experienced and worldly lover.

Better together are Oliver and Lane, especially when Conversations With Friends is able to dive into the longstanding well of love between their characters. For long stretches of time, though, Frances and Bobbi’s relationship is defined by the distance between them — which only grows as the pair continue to spend copious amounts of time together and exchange flurries of emails, but bite back the hurt or anger they can’ don’t quite bring themselves to articulate. As their friendship cools, so does the series.

To some extent, the remoteness is by design. All four leads wrestle with the same irony: They’re creatives devoted to the art of self-expression, happy to pour their ideas into words or explode with feeling onstage or simply debate over drinks for hours. At the same time, they shrink from the challenge of saying what’s really in their hearts, in the moments it matters most. The tension gives Conversations With Friends a brittle quality, like it might break if it’s pushed too hard. But by the middle of its 12 half-hour episodes, it’s hard not to wish someone would. The show’s restraint, and its characters’ detachment, threatens to turn bloodless and opaque.

Eventually, something does break. Pushed to the edges of what they’re willing or able to tolerate in silence, the characters find themselves speaking for the first time with genuine vulnerability, no longer hiding their desires or wounds under stilted small talk or cerebral explanations. It’s as if the sun has sliced ​​through the clouds for the first time after days of drizzle — it feels all the warmer and more beautiful because it’s such a marked change from what’s come before. But the light is floating, coming as it does toward the end of the series. When it fades, what lingers in the memory are the long stretches of delicate chill.