Alfonso Ribeiro Doesn’t Want to Do The Carlton Dance Anymore 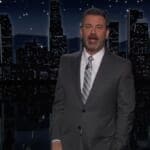 If you happen to see Alfonso Ribeiro while walking down the street, don’t ask him to do the Carlton dance. He’s really had just about enough, and he will say no

The “Fresh Prince of Bel-Air” star and “America’s Funniest Home Videos” host stopped by “Jimmy Kimmel Live!” on Monday night, and as he sat down, Kimmel pointed out that Alfonso is a “great” unique name. Ribeiro quickly agreed, joking that “I like it better than Carlton,” referring to his beloved character’s name on “Fresh Prince”

Kimmel then reassured Ribeiro that he would not be asking him to do Carlton’s iconic dance while on the show, prompting a huge sigh of relief from Ribeiro. The late night host posited that the actor “must want to kill people when they ask” for the dance — and he wasn’t far off.

“I won’t say kill, but I uh, you know, I don’t have a love for it like they do,” Ribeiro said. “I mean I typically get asked to do the dance pretty much every day of my life if I go outside.”

Of course, Ribeiro has no qualms about turning people down when they do ask.

Really, he’s just a little baffled by the logic and thought process that leads a person to demanding someone they don’t know how to perform for them on the street.

“The weird part for me is trying to understand what’s happening in their head, right?” Ribeiro added. “Like what makes you think that you just gonna ask a random person to dance for you, and they’re gonna be like ‘Oh my God, I’ve been waiting for you to ask! Hold on a second, let me get into character.’ It’s not — I don’t get it. It’s not gonna happen.”

You can watch Ribeiro’s full thoughts on the Carlton in the video here and above.