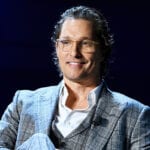 If Beto O’Rourke is elected the next governor of Texas, he would happily welcome Matthew McConaughey into his administration, if the actor wanted a job.

O’Rourke appeared on “Late Night with Seth Meyers” on Tuesday night, as part of his campaign to defeat sitting Governor Greg Abbott. During the conversation, Meyers pointed out that McConaughey himself was at one time considering running for the same position, but ultimately decided against it. That said, the late night host was curious if there might be another position for McConaughey in an O’Rourke administration.

“Absolutely,” O’Rourke said without hesitation. “This guy’s a great Texan. Beyond being an extraordinary actor, when the chips are down in our state, this guy shows up.”

O’Rourke then listed several recent occasions in which McConaughey helped the people of Texas, including after a mass shooting in El Paso and last year’s winter weather crisis which left thousands in the state without power.

“This guy’s there for Texas, and he’s got such an amazing heart, so whatever he wants to do, and whoever he can help, we want to turn him loose and let him do that,” O’Rourke added. “He’s an example of the spirit of the state. I don’t know if the guy’s a Republican or a Democrat, and it doesn’t matter, because before either of those things, we’re Texans. We’re Americans, we’re human beings, and we should start treating one another that way.”

You can watch Beto O’Rourke’s full conversation with Seth Meyers in the video here and above.