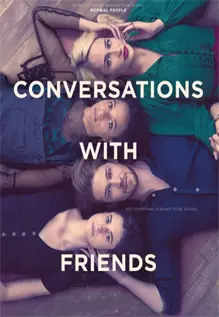 REVIEW: Based on Sally Rooney’s acclaimed novel of the same name, the drama traces two young women who become involved with an older couple in Dublin. As a result, these characters form a quadrilateral, and what follows turns their lives upside down. The majority of the creative team from ‘Normal People,’ including Oscar-nominated director Lenny Abrahamson, screenwriter Alice Birch and source material by author Sally Rooney, has returned for ‘Conversations with friends.’ And they’ve created a series that is mostly beautiful to look at while it deals with the same themes of love and vulnerability as ‘Normal People.’

This time, it’s about Francis and Bobbi, two ex-girlfriends-turned-best-friends who are practically inseparable and perform spoken word poetry together in Dublin, where Melissa, an author in her early thirties, notices them. She invites them to her house at Ella, where they meet her handsome actor husband, Nick. The married couple is as lovely as they are estranged from one another, allowing Francis and Bobbi to connect with them right away. As a result, their four lives become increasingly entwined, with Frances and Nick’s secretly romantic relationship deepening, and Bobbi gravitating toward Melissa and separating herself from Frances. Both friends take sides in the other couple’s marriage, putting their own relationship at risk.

This 12-part half-hour series follows a group of angsty Irish millennials as they get caught up in complicated romantic and social dynamics. Given the source material, the show cleverly replicates the novel’s story, capturing the details and lives of the characters from the most basic conversations. Throughout, it’s a slow-burning drama with intrigue, sexual tension, and interesting friendship dynamics among its characters. The narrative navigates through a series of relationships that force the protagonist—an unusually contradictory creation, both clever and yet so blind at the same time—to confront her own vulnerabilities in her for the first time. And while Francis and Nick gradually form a bond, their love is tending at times and lacks the passion needed to propel their story forward. Melissa and Bobbi, on the other hand, have a little spark flying between them. But there is a certain level of detachment among the characters that make it even more difficult for viewers to connect.

Newcomer Alison Oliver is convincing and at ease in the role of a shy, observant, logical, and sharp 21-year-old college student. Her performance, however, falls short of her potential as the show’s protagonist. As Bobbi, Sasha Lane of ‘American Honey’ proves to be an excellent choice as confident, self-assured, outspoken, and captivating. Joe Alwyn (best known for his act in ‘The Favorite’) plays Nick with restraint and emotion. He is never overly expressive, but his chemistry with Oliver is palpable onscreen; Despite this, they only have mild friction together. Indeed, Oliver and Lane work better together, especially when the show can explore their characters’ long-standing love. Melissa, played by Jemima Kirke (Girls and Sex Education), is the only one of the four characters with whom you can empathize. Her character de ella is notable for how she handles the situation of discovering her husband’s extramarital affair. Kirke is stunning in every shot.

Given the sensual source material, ‘Conversations with Friends’ (original Sally Rooney novel) is a slow-burner that takes its own sweet time to connect with the audience, but it’s still suitable for a one-time watch.