Defense suggests complainant made up ‘stories’ to get ‘revenge’ on Hoggard 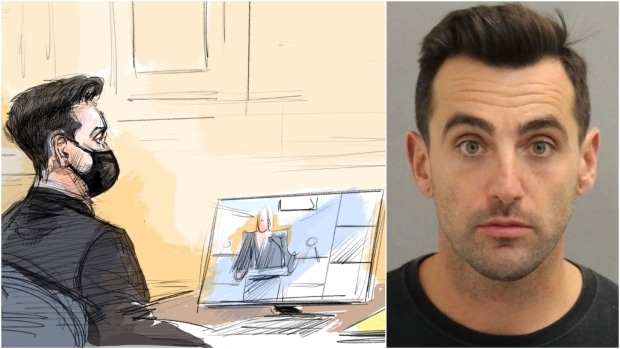 WARNING: This story contains graphic details that are disturbing.

TORONTO – Defense lawyers suggested Wednesday that an Ottawa woman fabricated rape allegations about Canadian musician Jacob Hoggard as a “form of revenge” after he physically injured her during consensual sex and hurt her feelings.

Lawyers for Hoggard questioned the woman, who is the second complainant in the trial, about her encounter with the Hedley frontman and their communications afterward, which included text messages and a phone call.

The woman, now in her late 20s, has testified she came across the singer on the dating app Tinder in November 2016 and, weeks later, agreed to meet him in Toronto to have sex. But she said she did not consent to what he transpired in his hotel room.

She told the court Hoggard raped her anally, vaginally and orally and at one point choked her so hard she thought she might die. She was left bleeding and with bruises, she said.

Hoggard texted her after she left the hotel, and about a day later, the woman sent him a message saying that he had raped her and asking to talk on the phone, she said. She said the call took place in the days following the encounter and was very brief — about 30 seconds long.

During cross-examination Wednesday, defense lawyer Megan Savard suggested the complainant was upset with Hoggard during the call because he seemed to no longer be interested in her.

“You’re also upset, I’m going to suggest, that he injured you in the course of consensual sex, you thought he was being inconsiderate not to check in with you and it added to the hurt feelings you had as a result of having been essentially dropped by this rock star,” Savard said.

The complainant was adamant that it wasn’t the case and that she wanted him to apologize.

At another point in her cross-examination, Savard suggested the woman wanted retribution.

“If he wasn’t going to keep talking to you, you were going to make up stories about him as a form of revenge,” the lawyer said.

“If he wasn’t going to apologize for raping me, I was going to tell people about it,” the complainant replied.

Hoggard has pleaded not guilty to two counts of sexual assault causing bodily harm and one of sexual interference, a charge that relates to the sexual touching of someone under 16.

An agreed statement of facts says he had a sexual encounter with each of the complainants on separate occasions in the fall of 2016.

On Wednesday, the complainant sobbed heavily on the stand as a recording of her call with Hoggard was played in court, prompting Ontario Superior Court Justice Gillian Roberts to twice suggest postponing cross-examination.

“This was a very traumatizing event for me and I spent six years of my life trying to block it out,” the complainant said, adding it was difficult to hear Hoggard’s voice on the call.

In the roughly 15-minute recording, Hoggard spoke calmly and in a soothing tone, saying the woman’s allegation by text “came out of left field” and that he thought they “had a really nice time together.”

The woman, whose voice sounded strained and distraught, said “not exactly” and added that she experienced serious pain during the encounter and afterward.

Another time, Hoggard said he had been attentive throughout the encounter.

“Between you and I, it was very obvious that I was paying close attention to how you felt and wasn’t ignoring how you felt. Unless you feel otherwise but that would completely shock me,” he said on the call.

“I guess I just have a different opinion than you do,” the woman responded.

At various points, she indicated his words sounded rehearsed or coached, and suggested he was trying to protect himself.

During cross-examination, Savard suggested the woman had misrepresented the length, context and contents of the call, denying that Hoggard expressed concern for her and claiming that he’d blocked her afterward, in order to win over the jury.

“You tried to think about how a rapist would respond…and told that story to the jury,” Savard said.

“No, he’s the only rapist I know,” the woman said.

The defense also indicated the woman told Hoggard she needed stitches in her vagina, which was false, and that she was going to contact a lawyer if he didn’t apologize.

She acknowledged she lied to Hoggard during the call about needing stitches and possibly contacting a lawyer in an effort to get him to apologize.

“I was trying to get him to admit what he did to me” and to acknowledge its severity, she said.

Court has heard that, at some point, the woman reached out to Hoggard’s ex-girlfriend, now his wife, through direct message on Instagram and asked if she had a similar experience with him.

“She told me that he had done this to other people, in that conversation,” she told jurors.

“You’re talking about his wife, who is sitting in court right now?” Savard asked.

“Absolutely. And then she told me that I needed to go to the police,” and to the doctor to get checked for sexually transmitted infections, the woman replied.

Sitting in court, Hoggard’s wife, Rebekah Asselstine, appeared shocked and stared ahead with her mouth agape.

Savard later showed the woman a screenshot of an exchange between her and Asselstine and suggested Asselstine only said she had been contacted by others about Hoggard cheating on her, but never about him hurting anyone.

The woman did an anonymous interview with the CBC regarding her allegations in 2018, and later filed a report with police.

The complainant is expected to return to the stand on Friday.

The other complainant, who was 16 at the time, has testified that Hoggard raped her vaginally and orally, and attempted to do so anally, on Sept. 30, 2016.

This report by The Canadian Press was first published May 11, 2022.