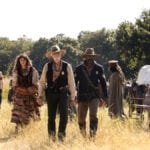 The Paramount+ series stars Stallone as New York mob boss Dwight “The General” Manfredi, who is exiled to Tulsa, Oklahoma after being released from a 25-year prison stint. There, he sets up his own crew from a group of “unlikely characters.”

Hedlund will play series regular, Mitch Keller, an Oklahoma native and ex-bull-rider who retired prematurely after injuries led to addiction.

Hedlund first broke out in the Brad Pitt war epic “Troy,” and has gone on to star in films including Netflix’s “Mudbound” and “Triple Frontier,” as well as “Tron: Legacy,” “Four Brothers,” “Inside Llewyn Davis,” and “Country Strong.” “Tulsa King” will be his second regular TV role after the 2017 HBO series “Mosaic,” which starred Sharon Stone.

He is repped by WME, Brillstein Entertainment Partners, and Sloane Offer.

“Tulsa King,” which has already begun production, is from “Yellowstone” creator Taylor Sheridan, who serves as executive producer. Terrence Winter will be the showrunner and executive producer. Sheridan and Winter executive produces along with Stallone, David C. Glasser, Ron Burkle, Bob Yari, David Hutkin Allen Coulter and Braden Aftergood. The series is an MTV Entertainment Studios and 101 Studios production.