Joy Behar S-Bomb Slips Past Censors on The View 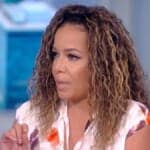 Joy Behar was just a little too quick with a rare swear Wednesday for the censors’ delay.

“The View” crew was wrapping a segment about Twitter possibly bringing back Donald Trump when something hit the fan – and whoever had their finger on the bleep button was a step slow. It wasn’t clear how wide the FCC no-no word was broadcast, but it was clearly heard in realtime at TheWrap, and captured in the (NSFW!) video above.

“He can say stupid things anywhere,” Behar said, then adding over crosstalk: “Yeah. Exactly. The previous tweets were all dumb shit!”

The bleep – or as it is these days, a block of silence – hit the moment Behar bit down on the “t.” By the time the audio returned, Behar was already backtracking as her co-hosts realized what she’d just said.

Behar may have been doing the math on what the folks at the FCC – known to be sticky about the so-called “seven dirty words” – will think of the escaped s-bomb.

ABC did not immediately return messages left for comment Wednesday.

Andi Ortiz contributed to this story.