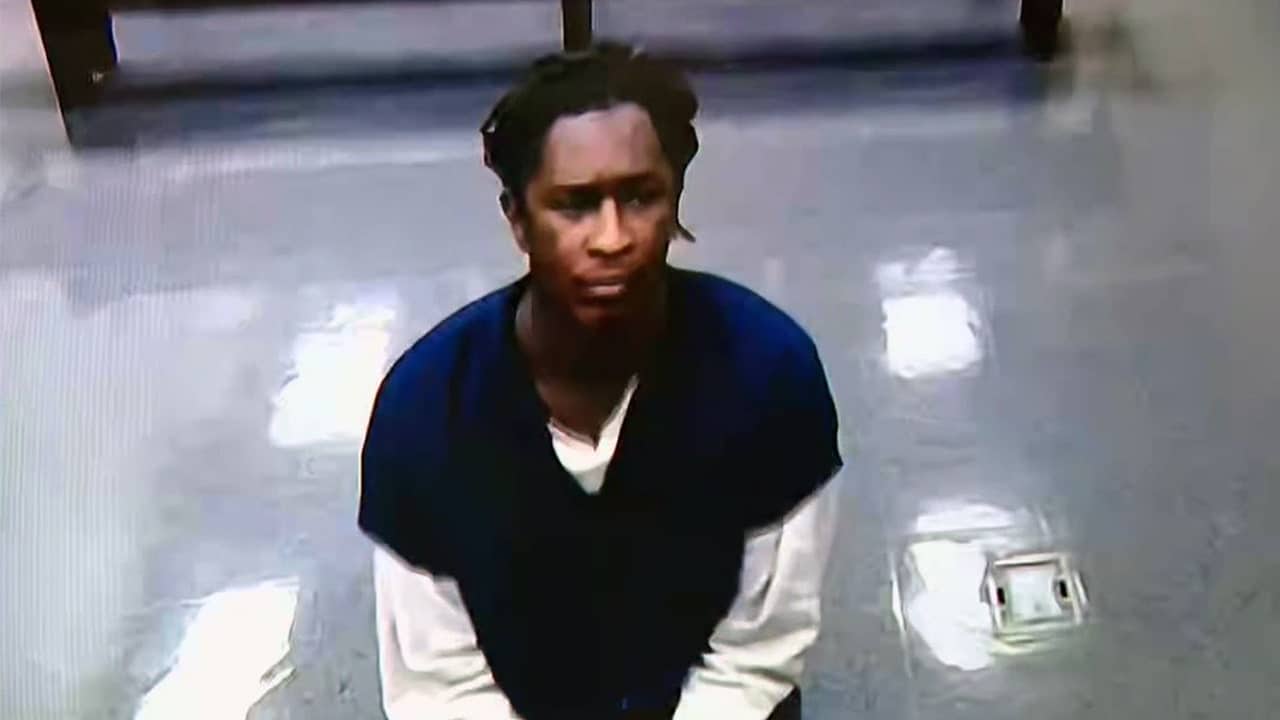 Rapper Young Thug, or real name Jeffery Williams, made his first court appearance Tuesday afternoon. Prosecutors say they named him in an 88-page indictment for alleged gang activity. A total of 28 people were listed in the indictment, authorities say.

ATLANTA – Young Thug is one of Atlanta’s “top offenders,” Atlanta Police Chief Rodney Bryant said on Tuesday, just a day after the popular rapper was arrested for criminal street activity and conspiracy to violate the Racketeer Influenced and Corrupt Organizations (RICO) Act.

The 30-year-old, whose legal name is Jeffery Lamar Williams, was arrested on Monday during a raid on a Buckhead mansion following his indictment. Tuesday, Williams shuffled into a frame for a video hearing from the Fulton County Jail. His usual stylish clothing from him was replaced by a blue jumpsuit and handcuffs.

“You are here because you have been indicted…for conspiracy to violate the Racketeer Influenced and Corrupt Organizations Act and participation in criminal street gang activity,” the judge told Williams.

“It does not matter what your notoriety is, what your fame is, if you come to Fulton County, Georgia and you commit crimes and certainly if those crimes are in furtherance of a street gang, that you are going to become a target and a focus of this district attorney’s office and we are going to prosecute you to the fullest extent of the law,” Fulton County District Attorney Fani WIllis said during a press conference that same day.

WIllis said Williams is one of three founding members of the so-called “Young Slime Life” (YSL) enterprise, which associates with the Blood street gang. The 88-page indictment filed on Sunday outlines 180 acts that support just the first of the 56 separate charges for 28 gang members.

“My number one focus is targeting gangs and there’s a reason for that. They are committing, conservatively, 75-80% of all of the violent crime we are seeing in our community,” Willis said.

READ THE FULL LIST OF THOSE INDICTED AND THE CHARGES

The DA indicted Williams and 27 other members of YSL including fellow rappers Gunna and Yak Gotti. All were charged with racketeering.

Willis’ office also releases associated social media posts the indictment states is “an overt act in furtherance of the conspiracy.”

“We are proud to bring forth this indictment and hopefully to bring justice to a lot of the community who was victimized through the course you see in this indictment, but more importantly, the most important thing we are here to do is to keep this community safe and we believe removing these 28 defendants will keep Fulton County safer,,” Willis said.

See also  For All Mankind Season 2: Answers to Episode 1 of 5 Things (And 5 Questions We Still Have)

The judge told Williams during his hearing on Tuesday that bond could not be set for the 30-year-old rapper due to the indictment.

“Jeffery Williams, who performs as “Young Thug,” vehemently denies the allegations lodged against him in the Fulton County (Georgia) Indictment of May 9, 2022. We look forward to the opportunity to defend this case in court. We filed a Motion for Bond and anticipate a hearing in the near future. We will fight this case ethically, legally and zealously. Mr. Williams will be cleared.”

No date has been set yet for that bond hearing.

What is the Racketeer Influenced and Corrupt Organizations (RICO) Act?

Young Thug’s arrest has thrust the common, but complex charge of RICO back into the public spotlight.

The Racketeer Influenced and Corrupt Organizations Act, or RICO, was developed to fight organized crime. It was enacted in 1970 after being signed into law by President Richard Nixon.

Federally, RICO was originally intended to be used to combat the Mafia. It draws from a list of 27 federal crimes and eight state crimes committed repeated over the course of a 10-year period. Those crimes can include fraud, theft, computer crimes, embezzlement, credit scams, investment schemes, human trafficking, illegal gambling, bribery, kidnapping, murder, money laundering, counterfeiting, and various drug charges.

The Justice Department has used RICO to dismantle multiple crime families including the Gambions and has also helped to weed out corruption in several city police departments including those in Key West and Los Angeles. Prosecutors have also used RICO to try to dismantle several street gangs and helped in prosecuting businesses that break federal law.

Georgia’s RICO statutes are similar to the federal version, but are much broader in that the criminal “enterprise” does not have to be around as long. Georgia is one of only 33 states that has its own RICO statutes. However, in both state and federal laws, a pattern of criminal enterprise has to be established.

Violating RICO carries a maximum of 20 years and a fine that is “greater of $25,000 or three times the amount of pecuniary gain.”

Under RICO, impacted victims can seek civil recourse without the defendant being able to hide behind bankruptcy to skirt judgment or restitution.