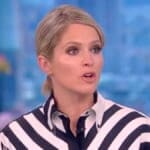 Sarah Silverman is standing by her decision to share a toothbrush with her boyfriend. And her logic from her just about broke the hosts of “The View” on Wednesday.

Stopping by to promote her newest show, Silverman was eventually asked about the fact that she and Rory Albanese share a toothbrush, with Hostin noting she is “befuddled” by the concept. The comedian stipulated that she had never shared a toothbrush with anyone in the past, but with this man, they have “never not shared a toothbrush.”

Silverman added that Hostin is not the first to ask about the ick factor of it, but then posed a counterargument.

“Why is that gross? We kiss each other where we pee!” Silverman argued.

At that, the entire table just about lost it. Hostin took a moment to seriously consider Silverman’s words, while Joy pointed out that really, “not everyone does that either,” and Sara Haines simply cracked up. All the while, Whoopi Goldberg looked both disgusted and confused but eventually, she settled the matter.

“Look, do what you want to do in your house!” Whoopi exclaimed, and promptly took the show to commercial break.

Before the camera could fully cut away, Silverman doubled down one last time, semi-joking that it’s “My body, my choice!”