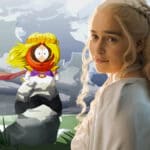 “South Park” has lined up a third event special on Paramount+.

The long-running animated series announced its latest exclusive event, titled “South Park: The Streaming Wars,” will premiere on Wednesday, June 1 on the streaming service. A fourth special will follow later this summer.

In the upcoming special, Cartman will lock horns with his mother in a battle of wills, “while an epic conflict unfolds and threatens South Park’s very existence,” per the streamer.

Paramount+ will become the exclusive streaming home of the entire catalog of “South Park” episodes for the US in 2025. The series version of the show currently streams on HBO Max.

Watch the special’s mini-teaser below.