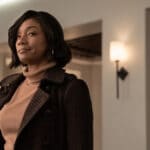 “The Afterparty” just got another suspect… or another victim… in the form of Ken Jeong.

Jeong has joined the just-started-filming second season of the Apple TV+ whodunit comedy show as a regular series, TheWrap has learned.

Like the inaugural season, this season of “The Afterparty” takes place at a gathering – this time a wedding (speculation suggests its Richardson and Chao’s wedding). Also like the first season, each episode will follow the format of a different movie genre.

Series creator Christopher Miller returns, although this time around he won’t be directing every episode, which is understandable considering how many projects he and creative partner Phil Lord are working on (among them: two “Into the Spider-Verse” sequels, Elizabeth Banks’ “Cocaine Bear” and an adaptation of Andy Weir’s heart-stopping sci-fi novel “Project Hail Mary”). Showrunning duties for Season 2 will be split between Miller and Anthony King, also an executive producer.

Jeong can currently be seen on Netflix’s gonzo Mike Myers series “The Pentaverate” and as a judge on “The Masked Singer.”