The Kids in the Hall TV Review

plot: The iconic Canadian sketch comedy troupe The Kids in the Hall return from the dead with a reboot of their ground-breaking sketch series.

Review: The Kids in the Hall aired as a series from 1989 until 1995 with one feature film, Brain Candy, and a limited series that aired in 2010 called Death Comes To Town. The comedy troupe’s absurdist approach to humor made them the modern-day Monty Python and they remain incredibly underrated. Thanks to Prime Video, the original cast of The Kids in the Hall are all back for a new season that is just as insanely funny as the original without missing a beat, even twenty-seven years later. Produced by SNL’s Lorne Michaels and with more adult humor than ever before, The Kids in the Hall may be one of the best revivals of any series to date.

If you are not familiar with The Kids in the Hall, the series featured Canadian comedians Dave Foley, Kevin McDonald, Mark McKinney, Scott Thompson, and Bruce McCullough who would portray almost every character regardless of gender, age, or sexuality. In the years since the series has been on the air, cultural appropriation has become a concern for many audiences which means the Kids no longer play other races, but they still will dress up as female characters. The original run of the show had the cast develop some trademark characters including Queen Elizabeth II, Mr. Tyzik (the head-crushing guy), Chicken Lady, Cabbage Head, and Scott Thompson’s Buddy Cole. Several of these characters make return appearances in the revival and reflect updates and attitudes relevant to 2022.

See also  Spider-Man: The saddest scene in all the movies (which is not a death)

Before you cry the revival of The Kids in the Hall as being woken up or revisionist, the series is still hilariously offensive in equal measure while both respecting and calling out elements of today’s culture. The series still features a lot of non-sequitir jokes and fourth-wall-breaking humor that ties some sketches together. For instance, in one episode, a sketch about Shakespeare coming back to life goes very awry with gory results only to be followed by a sketch about the appropriation of clown culture. That entire episode is also wrapped by a recurring sketch about the apocalypse and the 1970s pop song “Brand New Key’. Based on that description alone, you can tell this show is all over the place, but in the best way possible.

Having watched the original series when I was a kid, I recalled it being bizarre and funny with sexual references rather than featuring overt nudity or profanity, but I also watched the series on HBO (and later Comedy Central) where the series was edited for American audiences. Some content, mostly humor about religion or Canadian-specific references, was cut before airing in the US. Prime Video forces no edits on this series which uses a very liberal amount of profanity and nudity. The Kids themselves have never been shy about making fun of themselves and the first episode features Dave Foley and Kevin McDonald pantless with a clear view of their junk. It is played for laughs and is very funny, but also confirms that this new The Kids in the Hall series is taking the original series jokes and taking them to levels the cast was never able to go before.

when watching The Kids in the Hall, one does not go in expecting sense, coherence, or even a narrative structure. As a collection of vignettes and sketches with loose connections to one another, this series matches the formula of the original series almost exactly. Aside from the troupe being older, the only other significant change to these episodes is the inclusion of a segment called “Fans of The Kids in the Hall” which showcases familiar faces like Pete Davidson, Kenan Thompson, Will Forte, Catherine O’Hara and more playing fictional characters. Some of these segments reference the Kids while others are just random moments. All look to have been filmed from the actors’ homes but that is the only indicator of this series being filmed during the COVID-19 era. The rest of the sketches filmed in and around Toronto and other Canadian locales all feature pretty good special effects and production values ​​while still maintaining the look and feel of the original series.

Personally, I have nothing bad to say about The Kids in the Hall in their newest season. Compared to the return of their fellow Canuck, Mike Myers, in The Pentaverate, The Kids’ brand of comedy holds up far better decades later and that is probably because none of these skits have to connect and each segment runs for minutes rather than half hours and that affords each of the cast-members to be funny and take swings at trying new things. Sometimes they work and sometimes they don’t, but the weakest sketches in these episodes are bookended by very funny ones. If you didn’t find The Kids in the Hall funny in the 1990s, you aren’t going to be converted by this revival. For fans of the comedians, rest assured they are back and just as hilarious as before.

See also  Destiny 2: What is REALLY aboard the Glykon?

The Kids in the Hall revival premieres on May 13th on Prime Video. 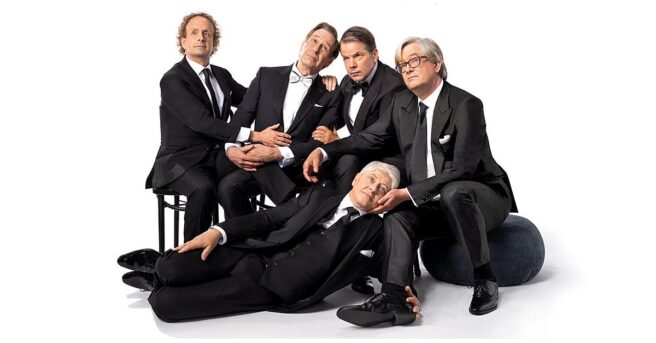