‘Kenan’ and ‘The Endgame’ Canceled at NBC 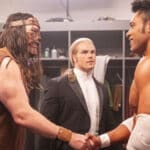 “Kenan” and “Mr. Mayor” have been canceled at NBC, TheWrap has learned, and so has the much-hyped freshman series “The Endgame.”

“The Endgame,” which starred Morena Baccarin and Ryan Michelle Bathe, premiered at the end of February to a 0.4 rating in the 18 to 49 demo and 3.2 million total viewers. It quickly declined throughout the season. The May 3 finale had a 0.2 demo rating and 1.4 million total viewers, close to what most of the 10-episode season drew.

The pilot “Hungry,” starring Ariel Winter of “Modern Family,” is also not moving forward at NBC.