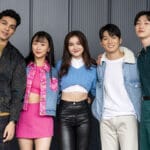 “Boo, Bitch,” the upcoming limited series starring Lana Condor of the “To All the Boys I’ve Loved Before” franchise, has a premiere date on Netflix.

The show, about a “high school senior, who’s lived her life safely under the radar, seizes the opportunity to change her narrative and start living an epic life, only to find out the next morning … she’s a motherf*%king ghost,” per Netflix, hits the streamer July 8.

Netflix also unveiled a first look at the series on Thursday.

Check out all the new photos below: