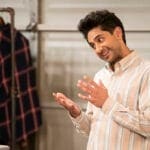 “Magnum PI,” “Good Sam,” and “How We Roll” will not be moving forward at CBS, TheWrap has learned.

Both “Good Sam” and “How We Roll” were canceled after just one season. “Magnum PI” just wrapped up its fourth season.

In fact, “How We Roll” premiered at the end of March. The sitcom opened to a fairly strong 0.34 rating among adults 18-49 and 4.2 million total viewers, according to Nielsen. However, it appeared to be somewhat doomed after executive producer David Hollander was asked following an investigation into unspecified misconduct.

As for “Magnum PI,” the series closed out Season 4 on Friday with a 0.3 demo rating and 4.9 million total viewers. While it certainly wasn’t CBS’ most popular series (people just really love the Dick Wolf procedurals), its performance was still fairly average.

These aren’t the first series to get the ax this TV season. Yesterday, the network canceled “United States of Al” as well.