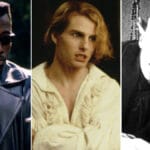 Forget the Montagues and Capulets, blood feuds don’t get more bloody than those between vampires and vampire hunters — which means the romance is even more forbidden and the body count certainly seems to be much higher in the trailer for Netflix’s “First Kill.”

Starring Sarah Catherine Hook (“The Conjuring: The Devil Made Me Do It”) as a young vampire, Juliette, and Imani Lewis (“Eighth Grade”) as Calliope, a vampire hunter from a long line of slayers, “First Kill” delivers a bloody YA twist on the forbidden lovers trope when the unlikely pair falls for each other. Watch the romance and warfare unfold in the trailer above.

Here’s the official logline, if you’re looking for more details: “When it’s time for teenage vampire Juliette to make her first kill so she can take her place among a powerful vampire family, she sets her sights on a new girl in town named Calliope. But much to Juliette’s surprise, Calliope is a vampire hunter, from a family of celebrated slayers. Both find that the other won’t be so easy to kill and, unfortunately, way too easy to fall for…”

All eight episodes of “First Kill” debut on Netflix June 10.