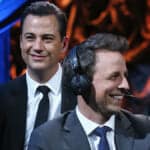 Seth Meyers really didn’t think he could be shocked by Donald Trump anymore — and then the twice impeached former president asked about hurricane guns.

According to a new report from rolling stoneIn the early days of his presidency, Trump repeatedly asked his national security aides if China had a weapon that could create large, man-made hurricanes, and was using it to deliberately target the United States. According to one Trump official, “It was almost too stupid for words” — and Meyers largely agreed.

But what hit Meyers the most wasn’t the idea of ​​the hurricane gun itself; it was that Trump apparently took that as a forgone conclusion and had a series of steps he wanted to take in response.

“Trump is so f—ing crazy that he doesn’t just ask ‘Does China have a hurricane gun,’ he’s got a bunch of follow-ups assuming the answer’s gonna be yes. How does he even get to the follow-ups?”

The late night host then acted out how he thought this conversation between Trump and his advisors should have gone, wherein his advisors would simply cut him off at the suggestion of a supervillainous weather machine. But alas, that is not how things went apparently.

“It’s never just one question, it’s a series of questions. I imagine him sitting in a leather chair, with a smoking jacket, in the study Sherlock-style, pondering the implications of his discovery of him, ”Meyers joked. To drive it home, he then put on his best posh accent, and acted out exactly how that would go.

“Is it possible that China is using a hurricane gun to attack us? And if that is the case, would the use of such a weapon not constitute an attack against a sovereign country?” Meyers dramatized. “And if, as international law stipulates, a sovereign nation has the right to defend itself when attacked by an aggressor nation, does that not then imply that the logical response would be to respond with a weapon of our own? Perhaps — and I am merely brainstorming here — a tornado cannon!”

Meyers then wondered if Trump’s belief in a weather weapon was perhaps why he was “so obsessed” with how much water came down as a result of Hurricane Florence. The late night host then played a selection of clips in which Trump talked about how “tremendously wet” that hurricane was, compared to previous ones. 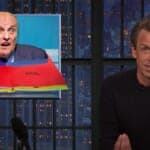 Joking aside though, Meyers took a moment to address why a weird theory like this matters in the grand scheme of things.

“Trump’s unhinged conspiracy theories matter, because they are the core of the modern GOP, a party that has repeatedly said Trump is their leader and if they get their way, will put Trump back in power in 2024, either by winning or finishing off the coup they started in 2020.”

You can watch Meyers’s full “A Closer Look” segment in the video here and above.