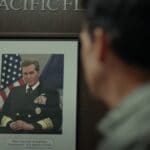 The young pilots in “Top Gun: Maverick” are warned at one point about a steep aerial climb that will subject them to massive G-force. Their bodies will feel like they weigh 2000 pounds, they are told, with their skulls crushing their spines, and breathing will feel like an elephant is on their chests pressing down on their lungs.

It’s a sensation not unlike the film’s relentless onslaught in its mission to entertain, delight and move audiences; “Top Gun: Maverick” resembles an amusement-park ride in all the worst ways, in that every second feels designed to provoke a response. It’s as much an entertainment machine as a roller coaster.

Admittedly, roller coasters are fun, and while my brain was constantly pushing back against the clichés, the predictability, the propaganda, and the barely-there plot and character of “Top Gun Maverick,” the stunning aerial sequences and overall commitment to the bit ensured I was never bored for two-plus hours. Some filmgoers, when complaining about critics, insist that they want to “turn their brain off” and just be entertained; “Top Gun: Maverick” is the kind of film that demands you not think about it for even a moment, and for audiences willing to disengage at that level, it will succeed.

Thirty-six years after “Top Gun,” Tom Cruise returns as Pete “Maverick” Mitchell; he’s still in the Navy, having spurned both promotions (he’s still a Captain) and attempts to get him to retire. In the film’s opening sequence, he gets to be mensch to the people serving under him while simultaneously showing off his skills from him as a pilot and his penchant for rule-breaking and authority-defying. (Both Ed Harris and Jon Hamm are saddled with the roles of superior officers who metaphorically shake their fists in the air over Maverick’s rebellious ways.)

The brass sends Maverick back to the Top Gun training facility in San Diego because of a touchy situation in a conveniently-never-named foreign country: Nation X has built a uranium-enrichment plant that’s about to go live, and someone has to fly low through a mountain range, drop a very precise bomb, then fly up a steep incline to escape. The bombing mission so resembles the climax of the first “Star Wars” that it’s somewhat of a surprise that Cruise’s onetime collaborator JJ Abrams isn’t involved; the script is by Ehren Kruger, Eric Warren Singer, and Christopher McQuarrie, with Joseph Kosinski (“Oblivion,” “TRON: Legacy”) taking over the director’s chair for the late Tony Scott.

Maverick assumes they want him to lead the mission, but no — he’s going back to teach the new breed of fighter pilots how to do it. The raid is, of course, the McGuffin; the movie really serves as the ultimate Gen X Dad fantasy, in which a 50-something gets to outsmart and outperform the younger generation’s best and brightest. (At one point, he even outshines them using his old, familiar tech, which the kids think of, as they do Maverick, as outdated and obsolete.) 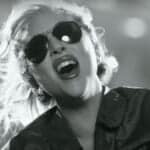 One of those younger pilots is Rooster (Miles Teller, who previously appeared in Kosinski’s underappreciated firefighter drama “Only the Brave”), the son of Maverick’s late wingman Goose (Anthony Edwards pops up in photos and flashbacks). Rooster resents Maverick for letting his dad die on his watch and for blocking his entry into the Naval Academy. (It was actually at the behest of Rooster’s late mother, but Maverick is too swell a guy to throw her under the bus.) Granted, if you do the math, Goose’s three- or four-year-old kid from the first movie would now be pushing 40, but again, this is not a movie that rewards thinking.

See also  Attack on Titan: the titans get out of control and strike back

The new pilots are a mostly amorphous bunch — Monica Barbaro (“The Good Cop”) and Lewis Pullman (“Outer Range”) manage to score a few laughs, at least — but the training sequences (and the big climactic bombing raid) provide “Top Gun: Maverick” with its raison d’être: the heart-in-your-throat scenes with Navy jets performing seemingly impossible choreography as they zip up to and away from each other. (These sequences provide cinematographer Claudio Miranda and a team of editors their moments to shine.)

Like so many sequels, particularly the kind decades removed from the original, “Top Gun: Maverick” plays upon nostalgia, starting with the very opening moments, in which a very 1986 synth beat underscores producer Jerry Bruckheimer’s logo card, once again bearing the name of his late partner Don Simpson. That beat then takes us to old snapshots of Goose, and then right into Kenny Loggins’ “Danger Zone.” (Later on, the score — credited to Harold Faltermeyer, Lady Gaga, and Hans Zimmer — will periodically bring back Faltermeyer’s “bonnnnng” sound from the original; all this time later, it’s a sound as connected to Taco Bell TV commercials as it is to “Top Gun.”) 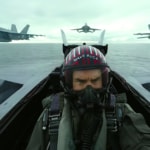 The memory hits keep coming throughout, up to and including a scene with Val Kilmer reprising his role as Iceman, now a top-ranking admiral. It’s to the film’s credit that it incorporates Kilmer’s real-life health issues and crafts a moment for the actor that’s poignant rather than exploitative.

The homoeroticism of “Top Gun” has been dialed down this time; Instead of beach volleyball, we get a shirtless game of touch football that’s another ode to abs but without the sexual tension that Scott brought to it. Similarly, the chest-puffing conflicts between Rooster and fellow pilot Hangman (Glen Powell, “Hidden Figures”) over methodologies (and over who’s the best flyer) carry a little of that “are these two gonna fight or make out” energy, but not nearly as much as Cruise and Kilmer mustered last time around.

And then there’s Maverick, still refusing to wear a helmet on his motorcycle, grinning so wide that you worry he’s going to get mosquitoes in his teeth. Tom Cruise wisely used his box-office clout from “Top Gun” to work with the likes of Scorsese and Kubrick; now he just makes sequels to his hits from him and gives you that movie-star swagger 24/7. His charisma of him remains off the charts, but there’s an undeniable melancholy in watching him go through these peaces all over again, no matter how skillfully he does so.

Notably missing from all this revamping is Kelly McGillis as the love interest from the first movie, who’s never mentioned at all. Instead, Jennifer Connelly steps in as a San Diego bar owner who’s had an on-again, off-again thing with Maverick for decades. Connelly brings a lot to a thankless role that essentially places her as the Pancho Barnes to Maverick’s Chuck Yeager.

In the end, “Top Gun: Maverick” counts as a worthy sequel in that it succeeds and fails in many of the same ways as the original. It’s another cornball male weepie and military recruitment ad that feels like every WWII movie got fed into an algorithm, and the flying sequences are breathtaking enough to make you forget that these guys and gals are engaging in the kind of combat scenarios that start wars. This isn’t important filmmaking, but for a film industry that’s desperate to get butts back in seats for big-screen, booming-sound spectacle, it ultimately fits the bill.

“Top Gun: Maverick” opens in US theaters May 27.