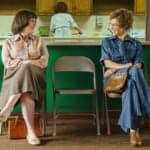 In the Hulu limited series “Candy,” about a shocking real-life 1980 murder, Jessica Biel’s seductive ax-swinger isn’t the only character steaming up the screen.

Timothy Simons, who plays her often clueless husband Pat, has an eyebrow-raising scene at a backyard barbecue where he’s wearing a baby blue leisure suit with a disturbingly tight crotch.

The actors cracked up when describing the moment when Allan appears to be checking out more than Pat’s grilling technique.

“We call that we call the ‘overcock’ shot,” Pablo added.

“There is a technical term for that in the business. A ‘dirty overcock’ is what that’s called,” Simons chimed in. I added, “I did steal that leisure suit, though. I own that now. I don’t know if I Hulu knows that, but you and I know that now.”

Biel shared she and Melanie Lynskey (who plays murder victim and Allan’s wife Betty) “both particularly liked his leisure suit.”

Schreiber’s character also gets a sexy slo-mo volleyball scene as Candy is eyeing men to become her lover. There are loving close-ups of the actor’s arms, legs and form-fitting shorts. Everyone on the press tour has been comparing it to the famous beach volleyball match in “Top Gun,” he admitted. “I love volleyball. I’m not very good at it, but it’s a great game. So it was fun to hang out in some shorts that felt smaller than briefs and whack some balls around the court.”

Both men in Candy’s life have a hard time admitting that the woman they both loved was capable of such unspeakable violence, even after Candy has confessed and is on trial.

“I don’t know if Allan ever gets there to be honest,” Schreiber said. “Even in the courtroom scene, where he’s testifying. They asked him how he felt when he found out that Candy was responsible. He says, ‘I can’t believe that she could have done it.’ So I think, even at the end, he’s still hesitant to admit that she may have been responsible. That’s one of the sort of mysteries of that we leave with is, what was the power that Candy had over these men that ultimately led them to not believe in her guilt of her?

Despite the affair, Pat also supports his wife. “Even when there is evidence hitting him in the face… he is trying to repress that idea that it could happen. I think that Pat would have believed her whatever she said. When she says she didn’t do it, he believes her and then when she says, ‘I did it, but I did it for these reasons,’ I think he just believes her all the way through. There’s a certain power that Candy has over Pat.” 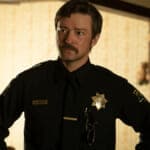 The characters are forced into an awkward alliance during the trial, and the actors took their inspiration from a news clip of the real Allan and Pat. “They’re sitting in the waiting room of the courtroom right next to each other in chairs… one’s reading and one’s just kind of staring into the distance. And just the awkwardness of that moment of them being at the trial, to support Candy…”

“We were so happy that we were able to play something that approximated that scene. I know that he has had an affair with my wife, we all know that she has killed his wife de ella, but we are just… that sort of human social contract takes over, ”said Simons. “And we’re just going to sit politely, uncomfortably in this courtroom waiting room.”