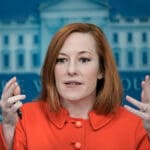 Ahead of her last day Friday as White House Press Secretary, Jen Psaki went on the record to defend old tweets from her incoming successor Karine Jean-Pierre that were resurfaced because they suggested elections in 2016 and 2018 were “stolen.”

Jean-Pierre, colloquially known as KJP, also made some harsh comments about Fox News during an MSNBC guest appearance that some say cast doubt on her ability to impartially call balls and strikes at the Briefing Room podium.

But Psaki, who has been press secretary since Biden’s inauguration in January 2021, excused Jean-Pierre’s past comments, suggesting everyone agrees that the elections in question have been “settled,” and arguing that KJP’s views fell within bounds at the time she made them. .

Psaki told mediate in a statement that Jean-Pierre “has affirmed that Donald Trump won in 2016, too. Like so many of us, Karine was concerned about the US intelligence community’s unanimous finding that Russia intervened to help Trump. But he won.”

Then in 2020: “Reminder: Brian Kemp stole the gubernatorial election from Georgians and Stacey Abrams.”

On that tweet, Psaki said: “We all agree the 2018 election in Georgia is settled. And we’re also all concerned about voter suppression issues, including the President. Kemp won and she sees that tweet as having oversimplified the problem.”

Cries of fraud and stolen elections became all but verboten after the Jan. 6 riot at the US Capitol, with social media censoring such speech and “Stop the Steal” becoming public pariahs. Over time, conservatives unearthed examples of progressive candidates and pundits crying election foul – including Abrams herself, who alleged widespread voter suppression in her failed 2018 campaign.

Speaking generally, Psaki told Mediate: “Just like four years later Joe Biden won the most votes of anyone in American history… She’s aligned with the President that people should admit who won regardless of preference.” 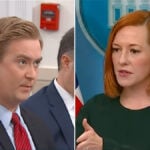 Jean-Pierre’s comments during a 2020 broadcast on MSNBC have also come under fire; on “AM Joy,” she said the network was “racist,” invoking Tucker Carlson’s coverage of coronavirus.

“This is a years-old clip of Karine, referring to an opinion host – not a reporter – when she was not in government and not speaking on behalf of the president,” Psaki said.

“As she has shown at the White House many times already, including in the Briefing Room, she will continue to follow the guidance of the President in engaging with a range of reporters from a broad range of outlets, including Fox, even when there are different points of view,” Psaki told Mediaite.