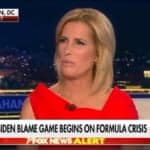 During his monologue on Thursday, Jimmy Kimmel talked about a lot of things — the first admitted case of COVID-19 in North Korea, the attack on Roe v Wade, and even a mention of the sexual abuse scandal involving congressman Jim Jordan. But the funniest moment, we think any way, was when Kimmel unveiled Joe Biden’s plan to personally solve the shortage of baby formula via an (obviously) fake commercial.

So if you’re just catching up, one of the few companies that makes baby formula had unsafe conditions at one of its factories which caused formula to be infected with a deadly bacteria, prompting an FDA recall. This exacerbated an already precarious problem with the global supply chain caused by the COVID-19 pandemic; that of course has been an issue since the pandemic began. The result? A lack of formula.

Kimmel got into the topic while talking about how “Republicans have been trying to shift the focus away from taking equal rights from us, by blaming Joe Biden for the nationwide shortage of baby formula. But the president isn’t having it. Not only is he pushing back, he has a plan to solve this problem personally.”

Kimmel then rolled the fake commercial. You can watch it above now — it begins 3 minutes and 45 seconds into the monologue — but we’ll give you the recap below.

“But we’ve been through tough times before, and we’ll get through them again. With Maw-Maw Biden’s Non-Clotting Baby Chow!” the commercial continues.

“This is the same porridge my own dear mother would fry up in the storm cellar back when I was no bigger than a hickory stump. Every can is chopped, boiled twice, and picked personally by me, Uncle Joe,” the ad says. 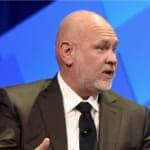 “All the ingredients a little nipper needs to make him strong enough to gnaw through chicken wire. For the daily recommended doses of corn fritters, sassafras, cod liver oil, Johnny Cakes, and a healthy helping of beaver meat,” the ad promises.

“Maw-Maw Biden’s Non-Clotting Baby Chow. Go to your local general store, and pick up a sack of chance today.”

Watch it, as we said, above right now.