Sam Claflin to Star in Supernatural Thriller ‘Bagman’ for Lionsgate 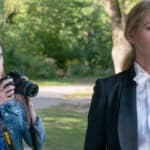 Sam Claflin is set to star in the supernatural thriller “Bagman” for Lionsgate, according to an individual with knowledge of the project. Claflin previously starred as Finnick Odair in the “Hunger Games” franchise for the studio.

Colm McCarthy (“The Girl With All the Gifts,” “Peaky Blinders,” ‘Black Mirror”) is set to direct the film, which centers on a father who struggles against his deepest inner fear when his childhood monster once again returns to haunt him. Only this time the fight isn’t for himself; it’s for his family from him.

The film, which Lionsgate will be launching sales for in Cannes, was written by John Hulme, and will be produced by Temple Hill’s Marty Bowen and Wyck Godfrey (“Twilight,” “Maze Runner,” “The Fault in Our Stars”).

“Since we first worked with him on Catching Fire, Sam has grown into a compelling leading man,” Lionsgate Motion Picture Group president Nathan Kahane said in a statement. “We’re thrilled that he responded so strongly to this project and we’re looking forward to starting production with him and our good friends at Temple Hill.”

Overseeing the project for Lionsgate are Meredith Wieck and Jorge Alfaro. Temple Hill exec John Fischer brought the project in and will oversee for the company. Dan Freedman oversaw the deal for the studio.

Claflin most recently wrapped include Amazon’s “Daisy Jones and the Six.” His other credits “Me Before You,” “Enola Holmes” and “Peaky Blinders.”

McCarthy is represented by UTA and Independent.

the hollywoodreporter first reported the news.