‘The Bachelor’ Among ABC Unscripted Renewals 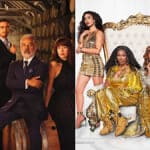 “The Bachelor” and “American Idol” will be returning to ABC.

This will mark Season 21 for “American Idol” and Season 27 of “The Bachelor.”

“Celebrity Wheel of Fortune” is getting its third season and “Shark Tank” is gearing up for Season 14.

The unscripted renewals follow several scripted renewals at ABC, including “The Goldbergs” and “Grey’s Anatomy.” The network has also been scrapping several series. Earlier this month, news broke that “Promised Land” and “Queens” will not be returning for a second season.

admin
See also  New Podcast Goes Behind The Scenes Of The Bachelor, KUWTK And More