The Kids in the Hall Make a Head-Crushing Return 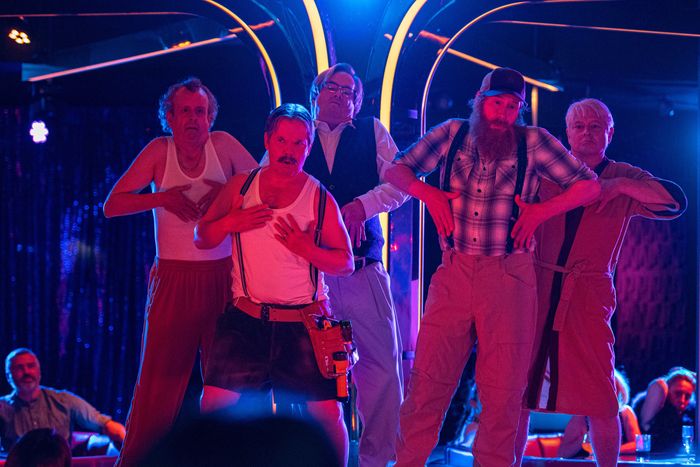 Kathryn VanArendonk is a critic who writes about TV and comedy. She gets mad when people say TV is a 10 hour movie.

What is funnier, ultimately, than the slow march of time toward inevitable death? The Kids in the Hall, the wildly influential Canadian sketch-comedy group that began in the ’80s, have known this from the start. Death, Kids member Dave Foley says, is “inherently funny, because it denies everything else. Death is the one thing that should remind you that absolutely everything else about life is absurd.” But comedy based on a deep sense of semi-nihilistic absurdism takes on a different quality when the Kids are no longer kids.

The idea of ​​a revived Kids in the Hall series, like so many other revivals of the past decade, comes packaged with intense trepidation. What if that nervy, surreal absurdism is blunted by nostalgic fondness? Is it possible to look back in celebration, without undercutting the past or, worse, being smugly self-congratulatory? Let’s also be honest: Who can truly feel confident that their male comedic heroes of the past are not at any moment about to reveal themselves to be anti-cancel-culture prophets, railing against political correctness and censorship?

Amazon Prime Video does not set this one up for success, either: The revival series is accompanied by a hagiographic two-part documentary on the group (The Kids in the Hall: Comedy Punks), which is the source of that Foley quote about the hilarity of death. The documentary is thorough and full of good context for KITH‘s subversive influence, but it’s tough to walk onto a stage after a hard act to follow, and it’s even more tough when that hard act is your past self. After the treacherously high expectations of reviving a beloved comedy series plus a swooning documentary, the cumulative experience of the new Kids in the Hall feels nearly miraculous. It’s wonderful to have so many things to dread, and to instead be greeted with strange, goofy, self-referential, yet self-deprecating sketches. The Kids, now around 60 years old, are still obsessed with absurdity and the inevitability of endings. If anything, they’re even sillier and darker than before.

The revival knows that there are expectations that need to be met. Beloved characters have to come back. Someone’s head needs to be crushed. But in every instance, the new series finds ways to develop on that past rather than simply lean on it. Scott Thompson’s groundbreaking gay character Buddy Cole is back, now strolling around and remembering all the banks and condos that have replaced gay bars, before eventually attending a ceremony to commemorate the last glory hole. A Mark McKinney secretary character returns, now scandalized by Zoom misconduct. There are ornamental callbacks everywhere.

But the new sketches manage to surprise amid the wash of familiar allusions. In one, a pinnacle of trivial gross-out weirdness, McKinney plays a strange Shakespeare-obsessed man, an asocial guy who seems primed to be the butt of a joke about fandom, or not fitting in, or intense hobbies. Instead, the combination of a fervent wish and a flash of lighting transforms a Shakepeare bust into a living Shakespeare, which quickly becomes a shocking, supremely stupid joke about the anatomy of a sculptural bust. Who is that joke for? What is it about? Maybe it’s about our misapprehensions about geniuses of the Western canon, and maybe it’s about nothing except the image of Shakespeare, reanimated as only a head and partial torso. Either version is glorious.

On the one end, there’s bizarre Shakespearean gore; on the other, a new sketch starring Foley as a radio DJ in a post-apocalyptic underground bunker, still doing stupid drive-time DJ voice, perpetually cuing up the one record he still has. (Melanie’s creepy-cheerful “Brand New Key,” which you will now have stuck in your head forever, I’m sorry.) “This is your friendly neighborhood DJ, Mike “Motormouth” Mulcahy!” Foley intones, his voice that perfect DJ blend of warm and empty. Then, as the record kicks in again, his face falls into a blank, shellshocked terror, and the camera rests on his chilling, thousand-yard stare. The Kids have not lost their taste for bleakness, nor has the passage of time blunted their instinct for poking at masculinity and figures of power.

See also  'Dexter: New Blood': The showrunner explains why the death of the end

One of the most obvious of these is a sketch in episode five, in which McKinney plays a power-mad villain insistent on gatekeeping people’s ability to make doo-doo jokes, but there’s also a crack at the Kids having sold their souls to put this series on Amazon. Even better, more subtle and proudly weird, is a sketch in episode four called “The Patrol,” in which McKinney (who gives several stand-out performances in the revival) plays a median American white guy who just can’t stop noticing that small things just aren’t how they used to be. If there is nostalgia here, there is also a fascination with mocking that same impulse.

In the best moment of self-referentiality, Foley and Kevin McDonald start into an MC Escher-esque sketch premise in episode three, with Foley playing a collector who’s arrived at a store, trying to get a good price for a VHS of a classic Kids in the Hall sketch (it’s McDonald playing a guy in a gorilla sketch). “Oh yeah, this sketch,” the McDonald store-clerk character says. “Unfortunately it’s not too popular anymore. There are a lot of Kevin McDonald sketches in the world.” I will not spoil where this sketch goes, but it is the best-case scenario for laughing at your own longevity.

There are some worst cases of self-referentiality, too. The most egregious is a running bit through each episode that features a celebrity cameo pretending to be an oddball KITH fan, a joke notably at odds with the sensibility of the rest of the series. It’s a sour note of sanctimony and legacy-building, one that feels like the exact opposite of that daffy, fun Kevin McDonald sketch.

Not every sketch is a home run. Even that wildly bizarre Shakespeare sketch feels like a beginning that never found an end. But the successes far outweigh the missteps, and it’s hard to come away feeling anything other than grateful. The new KITH series has not become precious about the group’s collective death drive, but neither are they now so cynical or fatalistic that they can no longer giggle. As the man in the towel would say, hell has frozen over. The Kids are back.

Sign up to get New York‘s week in reviews.

By submitting your email, you agree to our Terms and Privacy Notice and to receive email correspondence from us.