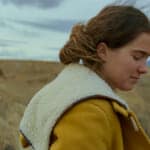 This review of “Lux Aeterna” was first published on May 20, 2019, after its premiere at the Cannes Film Festival.

Cinematic provocateurs have flourished at the Cannes Film Festival for years, with everyone from Jean-Luc Godard to Lars von Trier coming to the Croisette with works designed to provoke, confront or even annoy an audience. At this year’s festival, you could say that some of the extreme sections of Nicolas Winding Refn’s “Too Old to Die Young” have been designed to test an audience’s limits and make viewers uncomfortable.

But nobody does provocation these days quite like Gaspar Noe does. Since he broke out on the arthouse circuit with the brutal “Irreversible” in 2002, the Argentine director has been seeing how far he can go in a variety of unpalatable directions, making him a maestro of transgression whose audience shows up so that he can mess with them.

In Cannes in recent years, he’s presented a hardcore sex film in 3-D (“Love”) and a hallucinogenic dance film that ends in nearly an hour of drug-fueled chaos and violence (“Climax”). This year, he’s back with a twisted meditation on movies, religion, torture and lots of other stuff, though its main purpose seems to be to shout at the audience and flash things in our face.

The thing is, Noe is accomplished enough as a filmmaker that “Lux Aeterna,” which premiered in Cannes over the weekend, has a sort of twisted beauty to it. The film starts with a warning of sorts: “You are all in good health, but you cannot imagine the sheer happiness an epileptic feels just before a fit,” and then with a short treatise on medieval torture instruments.

And then Noe gets to work poking our buttons in the service of his own particular kind of artistic torture. We see a conversation between actresses Beatrice Dalle and Charlotte Gainsbourg about filmmaking, monstrous directors and the time a 16-year-old actor inadvertently ejaculated on Gainsbourg’s leg during a sex scene. (True or false? Who knows?)

The conversation is rendered in split screen even though the two women are sitting next to each other, because why not? So is much of the subsequent action, as we move to the set of a movie where Dalle is directing and Gainsbourg is playing a woman being burned at the stake as a witch. 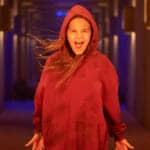 But this is not a smooth production, which clearly wouldn’t be of much interest to Noe. As in “Climax,” this gathering of artists quickly goes off the rails and descends into utter chaos.

The actors hate the director and each other, Gainsbourg is frantic after a disturbing phone call from her daughter, everybody screams at everybody else and, not for the first time in a Noe movie, we arrive at utter chaos, set to the monumental pounding strains of the “Dies Irae” from Verdi’s Requiem. And then the soundtrack begins to emit a piercing shriek, strobe lights begin flashing and stuff really hits the fan.

Is it enjoyable to watch? Hell no – there’s a reason why everyone on the screen is either screaming or crying for it to stop. But you have to hand it to Noe, because it is kind of mesmerizing in its perverse single-mindedness, and the fact that “Lux Aeterna” is only 50 minutes long makes it more durable. 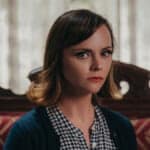 “Man, it’s starting to vibe, don’t you think?” one stagehand says to another in the midst of this madness. And maybe it is, though your mileage may vary on whether the vibing outweighs the annoyance of all that screeching and flashing.

When the images of people gradually fade away, we’re left with a screen simply flashing colors at the audience as the soundtrack screeches — it moves past depiction to become a visual and aural assault on the audience, a relentless provocation boiled down to the bare essentials.

And then just before the credits, a cross appears, perhaps to remind us that the title, from the Catholic funeral liturgy, translates to “Eternal Light.” So maybe this is God’s fault, not Gaspar’s.