Opinion | Ukraine wins the Eurovision feel-good vote. As it should have. 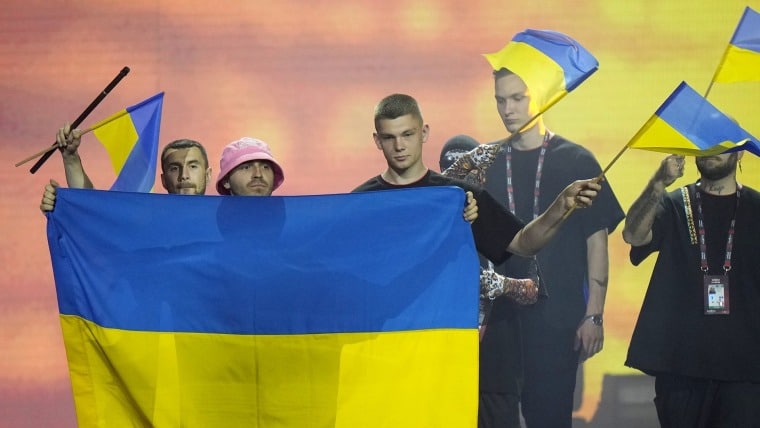 As the Russian invasion of Ukraine inches closer to the three-month mark, nearly all of Europe stopped on Saturday to honor one of the continent’s most popular traditions, the Eurovision Song Contest. Conceived as a tranquil way for European countries to compete against each other, the singing competition boasts that it’s helped keep the peace in Europe. Organized by the European Broadcasting Union, the event is marketed as a place where countries put aside their cultural differences and overcome language barriers through the power of music.

It’s a proxy outlet for the international politics bubbling beneath its slick europop surface, one those at home need more than ever before.

But Russia was banned this year, and Ukraine’s entry was one of those favored to win the 2022 Grand Final as much on sympathy as on merit. As expected, though the professional juries mostly backed other countries, the popular vote went overwhelmingly for Ukraine, giving it the win. That might seem to go against the spirit of the broadcast, but the intrigue is actually what makes Eurovision tick: It’s a proxy outlet for the international politics bubbling beneath its slick europop surface, one those at home need more than ever before.

It’s precisely this subsumed political feeling that brings throngs in to watch year after year. (The 2021 edition boasted an audience of 183 millionmaking it the most widely watched live non-sporting event in the world.) The singing contest is a cultural juggernaut that has mostly eluded American understanding and attention, except perhaps as the vehicle that launched ABBA and celine dion. From its decades as a positive gay influence (which is still a point of pride), to the satisfaction of voting for the country “that deserves a win,” Eurovision has always been more that just music, and with the war in Ukraine currently raging , Eurovision now feels more relevant than ever.

The opening Saturday was a bit on the nose, with a performance of “Give Peace A Chance.” The politics after that were more subtle, with many performers quietly sporting yellow and blue bands on their wrists or carrying small flags. But a few — like Iceland — had the nerve to break protocol and call out for peace in Ukraine. The hosts had the uncomfortable job of trying to ignore it all, or worse, refusing to give it a platform: In one extremely awkward moment, host and singer Mika snatched back the mic rather than risk the Ukrainian act saying something political during an interview segment .

The continent-wide music competition launched in 1956 with only a handful of participants and a mantra of inclusiveness. Over the ensuing six decades, Eurovision has grown to include up to 52 possible participating countries, though the most that have competed is 43. (Any country that has a TV broadcaster that’s a dues-paying member of the broadcasting union qualifies to submit an original song to be performed. It’s an eligibility requirement wide enough to include non-European countries like Israel and Australia, but not the United States .)

The organizers have insist time and again that the competition is apolitical in nature. It’s billed as escapism, all peace, love and music, with yearly themes like “come together” or “We Are One.” (This year, it’s “The Sound of Beauty.”) But the show has always been a stand-in for the current climate.

From Israel being accepted as a member in 1973 to the wave of Eastern European countries suddenly becoming eligible in the early 1990s, Eurovision is a show that reflects the times. During the reign of American imperial power and a stronger UK, song submissions starting in 1973 mostly defaulted to English, when the contest first relaxed rules enforcing national language requirements, and again in 1999 when they were completely removed. But as American influence has waned, the trend has swung back toward singing in one’s native tongue.

Political favoritism has always been visible among the jury vote, with countries seeing it as a tool for using soft power on their neighbors or as a way to snub those with whom they have political disagreements. But since the introduction of jury and televoting side by side, the show’s political surrogacy has been harder to hide — particularly since one rule is that the audience can’t vote for singers from their own country. In 2021, after the UK’s final withdrawal from the EU, it wound up awarded zero points. And since Russia passed its “gay propaganda” law in 2013, its acts have been booed regularly by the audience.

The Russian-Ukrainian tensions have been particularly glaring ever since the Kremlin’s invasion of Crimea in 2014. In 2016, Ukraine’s performer, Jamala, sang “1944,” a song inspired by her grandmother’s experience of being deported from the Soviet Union as part of Joseph Stalin’s purge of Crimean Tatars. Though her song by Ella was technically about a historical occurrence (and therefore skirted the show’s rules that songs not be about current political events), Russia complained, bringing attention to the song’s themes and propelling it to win via the popular vote. (since 2016voting has been a 50-50 split with traditional juries awarding their point spread first and then the popular vote totals revealed country by country.)

The next year, Ukraine hosted the event and banned Russia’s representative from entering the country due to her support of Moscow’s Crimean annexation. russia withdrew. Two years later, Ukraine ran into trouble with its own act, who refused to sign the contract to represent the country rather than take a political stand. That time it was Ukraine’s turn to withdraw.

This year’s contest only deepened the rift. Though at first the European Broadcasting Union refused to take a stance on Russia’s invasion of Ukraine, complaints by members and viewers reached a point that they could not ignore, and it disqualified Russia from the competition. in response, Putin has withdrawn from the broadcasting union altogether, and it’s unclear if and when Russia will return.

Meanwhile, Ukraine’s act, the Kalush Orchestra, performed “Stephanie,” sung entirely in Ukrainian and featuring a chorus rooted in the country’s folk music interspersed with rapped verse lyrics, a breakdancer, and a pair of traditional woodwind instruments, the sopilka and the telenka. With references to coming home on broken roads and appreciating mothers who protect their children, it’s not hard to see why it was an odds-on favorite.

See also  Madame Clairevoyant: Horoscopes for the Week of May 16

Despite the ordinance against politics, Ukraine’s act of course closed with a message begging for an end to the war. The (all-male) band is expected to return home directly after the show to rejoin the army and fight for their country. Most of the juries didn’t seem to appreciate it, making their top point getters the very non-political songs from Spain, Sweden and the UK. (Though Ukraine did get top votes from neighbors Poland, Moldova, Latvia, Romania and Lithuania.) But the European population at home wasn’t having it, giving Ukraine an astounding 439 point total from the televote, for an insurmountable 631 points (the second-highest in history) and the win.

No matter who ultimately winds up as this year’s breakout artists, the politicization of Eurovision will remain. It may not be the proxy for an entire war, but music is indeed a universal language, including that of politics. It will always be Europe’s most entertaining outlet for how its populace feels about the world at large and their neighbors.

Ani Bundel is a cultural critic who has been writing regularly since 2010. Her work can also be found at Elite Daily and WETA’s Telly Visions, where she also co-hosts “Telly Visions: The Podcast.”