‘Pivoting,’ ‘Our Kind of People’ Canceled at Fox 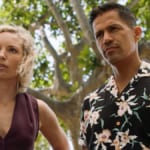 Fox has canceled freshman shows “Pivoting” and “Our Kind of People.”

“Pivoting” starred Eliza Coupe as Amy, Ginnifer Goodwin as Jodie and Maggie Q as Sarah. The single-camera comedy, written by “2 Broke Girls” and “The Conners” alum Liz Astrof, followed three women after the death of their childhood best friend. Faced with the reality that life is short and in a desperate attempt to find happiness, they make a series of impulsive, ill-advised and self-indulgent decisions, strengthening their bond and providing it’s never too late to screw up your life.

The comedy debuted in January and had a 10 episode run.

The show premiered last September and spanned 12 episodes in its Season 1 run.

The series was based on the book of the same name by Lawrence Otis, which was released in 1999.

This week has seen a number of shows canceled across the major broadcast networks CBS, NBC, ABC and The CW.