The Kids In The Hall Review: The Best Sketch Show Ever Is Back 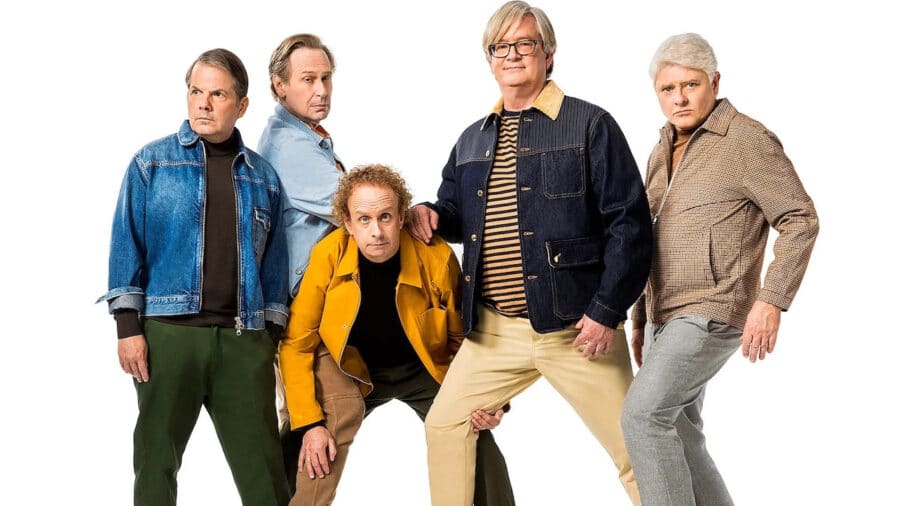 By Drew Dietsch | 15 seconds ago

The Kids in the Hall was one of the most influential and groundbreaking sketch comedy shows of its era. The five person troupe consisting of Dave Foley, Bruce McCulloch, Kevin McDonald, Mark McKinney, and Scott Thompson blazed a bizarre trail during their peak popularity, and their post-television show was continued to be as absurdist with one feature film – the demented and underappreciated Brain Candy – and a television miniseries called Death Comes to Town. Now, over a decade after their last cinematic endeavor, the Kids are back with eight episodes over on Amazon Prime.

There is always an air of uncertainty when performers reunite after a long hiatus and that goes doubly for the world of comedy. The Kids in the Hall were always irreverent and certainly willing to push boundaries back in the day, but could their style of wackiness work in this modern age? Clearly, this revival season knows it has to address the Kids’ place in the world today, and it does so with the same sharp silliness the troupe has always been known for.

In fact, it is sensational seeing The Kids in the Hall come back and feel like they haven’t missed a step. The show captures every bit of the anarchic glee from the original series. The very nature of a sketch show means that some bits will land better than others, but there is rarely a weak sketch in the entire eight episodes. And thanks to being on a streaming platform, the show is allowed to stretch its legs when it comes to how far its content can go. After we get to hear the always welcome intro song by Shadowy Men on a Shadowy Planet, the very first proper sketch features full-frontal male nudity and is gloriously taking advantage of being able to do so.

See also  Superman and Lois: Why Captain Luthor Hates the Man of Steel

Some people might be worried that a comedy group consisting of five older white guys might mean that there will be some cantankerous punching down towards the younger generation. And while The Kids in the Hall do step into that arena – one of the final sketches of this season features a Gen Z man in a cage looking at his phone and being presented like a caveman from another time – it never seems to come from a place of meaning. The Kids have always been about going to the most absurd lengths with an idea or subject, and these few moments come across as goofier than legitimately argumentative. And considering the Kids kickstart this season by making fun of themselves, it’s clear they are well-practiced at successfully poking fun at anyone.

And if you are a fan of The Kids in the Hall, you will be treated to plenty of recurring themes and characters. Although there are lots of familiar characters from the show’s history, it never feels like a lazy attempt to rest on their laurels. Beloved characters like Buddy Cole and Gavin are given sketches that feel like they could work as true sendoffs, and that also allows the Kids to play around with some of their original sketches for this season. The Kids were an instrumental force in bringing dynamic cinema to the world of sketch comedy, and that’s no different in this new series. There is a drive here to keep pushing forward and try out ideas that they might never have had the opportunity to do in a cinematic realm. It’s astonishing to see this level of freshness from a comedy troupe that is nearly four decades old.

See also  The MCU's new Captain America has a similar origin to ... Spider-Man?

The lingering question is whether or not this is the last time we’ll see The Kids in the Hall in an episodic television show. There is definitely a sense that this Amazon Prime season was conceived as a potential one-off and farewell to the Kids. If that is the case, it is one of the best final seasons of a television show in recent memory. However, these eight episodes prove that the comedic voices of these Canadian treasures are as vibrant as ever. If the show does well on Amazon Prime, is there any chance we could see yet another season? There are a plethora of fan-favorite characters that could do with one last hurrah – fingers crossed to see what Simon and Hecubus are up to these days – but it’s actually the newer material that seems most exciting when thinking about more The Kids in the Hall.

It can be hard to really laugh these days. The world seems crazier with every passing minute. We could all use more of the ludicrousness that powers The Kids in the Hall. If this is their final sketch showing out, they could not have gone out on a higher note. But more than that, if we could get just one more season, it would make the planet a better place.

The Kids in the Hall Review Score: