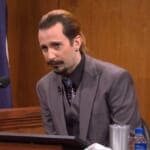 There was only nostalgia in the audience during Saturday Night Live this week, as host Selena Gomez closed out her monologue with a childhood favorite for millennials. Harking back to her first on-screen job, Gomez wrapped things up with a sing-along of the “Barney & Friends” theme song.

Later, Gomez ribbed SNL itself as a solid alternative to dating apps, considering how many people have met their partners on the show (Scarlett Johansson, Emma Stone, and mostly recently, Kim Kardashian). “Since I don’t really want to try the dating apps, I just want to put it out in the universe that I’m manifesting love,” she joked. “And I would like to say that I’m looking for my soulmate, but at this point, I will take anyone.”

What followed was a slew of SNL cast members valiantly volunteering to date Gomez, including Kyle Mooney and James Austin Johnson. But, as Gomez pointed out, they are both married. Finally, Punkie Johnson stepped up to bat — and nearly succeeded.

“Honestly? Kind of a vibe, but let’s see how the after party goes,” Gomez responded.

On a more serious note, Gomez told the audience how excited, but admittedly nervous she was to be hosting. To calm herself though, she recalled the words of an old co-star: “I love you, you love me…”

And yes, obviously what ensued was an entire audience sing-along of the “Barney & Friends” theme song, “I Love You.” It was nostalgic and wonderful for every millennial and proved one thing to be true: “we’re a happy family.”

You can watch Selena Gomez’s “SNL” monologue in the video above.