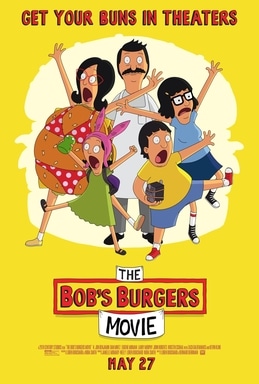 It’s crazy to this that “Bob’s Burgers” has been on the air is 2011. 11 years this show has been on Fox spanning 12 seasons and over 230 episodes. If you haven’t watched this show, I highly recommend it. It is one of those shows that you will watch and do not want to miss a single line of dialogue because literally each word is gold! “The Bob’s Burgers Movie” works as a long episode of the show and delivers some great laughs. I got to admit, I was nervous if the show would hold up as a feature length film but the jokes don’t get tired and the musical acts in the film carry along everything together.

Official Premise: A ruptured water main creates an enormous sinkhole right in front of Bob’s Burgers, blocking the entrance indefinitely and ruining the Belchers’ plans for a successful summer. While Bob and Linda struggle to keep the business afloat, the kids try to solve a mystery that could save their family’s restaurant. As the dangers mount, these underdogs help each other find hope as they try to get back behind the counter.

If you are wondering how can I see “The Bob’s Burgers Movie” if I have never seen “Bob’s Burgers” the TV show, well you definitely can that’s for sure. My wife came along to the screening, who has many seen a few clips of the show and had an excellent time throughout laughing and enjoying this movie. Also all the original cast is back for the movie, which is great because they all crack me up. If you are looking for something alternative to see this summer, this film is a great option since it is fairly family friendly and packs some fun songs and non-stop jokes.