Tijuana: The limbo of migrants expelled from the US by Title 42 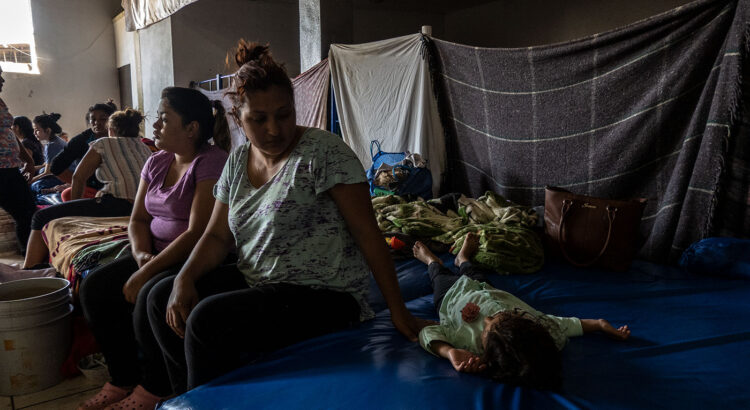 Tijuana Baja California. When “Norma” got on a plane with her baby, she didn’t know where she was going to land. Nobody told her that she would cross the United States from coast to coast and that they would take her detained to a border area, where she only found the exit door of the country where she hoped to live.

At that time, none of the migrants who boarded the aircraft detained knew where they were going. They received no prior notice. They knew their destination when the device was in the air.

Norma is not the real name of this 21-year-old woman from Honduras, who traveled from San Pedro Sula with her one-year-old baby to Texas, United States.

He risked his life and that of his daughter because a gang of maras murdered his father and four other relatives.

This crime was followed by another: the gang members kept the public transportation business, which was the only asset they had.

Around those days, Norma learned that the Migrant Protection Protocols (MPP) program, established by the United States government to force humanitarian asylum seekers to wait in Mexico, while their request was resolved, had been cancelled.

The program –also known as Stay in Mexico– was imposed by Donald Trump and accepted by the government of Andrés Manuel López Obrador. For some time it functioned as a kind of dissuasive message for those who wanted to travel to the United States without documents.

The strategy forced more than 68,000 people to wait for their court hearings in Mexico, according to the report. in the mouth of the wolfcarried out by the Foundation for Justice (FJEDD).

The current president of the United States, Joe Biden, canceled the program when he arrived at the White House, although months later he restored it by court order.

The announcement of the suspension of MPP was for Norma and thousands of other migrants, the announcement they expected. Without thinking, she left Honduras, traveled to northern Mexico to cross the border, and turned herself in with her family to the US Border Patrol in hopes of obtaining refuge.

In a few hours reality caught up with her. Norma was deported expressly under the Title 42 program, a health measure to contain the spread of the covid-19 pandemic.

Norma was expelled from the United States to Mexico, under the so-called Title 42. She is waiting in a shelter in Tijuana for a way out of the limbo to which she has been sentenced.

Norma was expelled from the United States to Mexico, under the so-called Title 42. She is waiting in a shelter in Tijuana for a way out of the limbo to which she has been sentenced. Photo: Duilio Rodríguez.

Instead of an opportunity to apply for humanitarian asylum, Customs and Border Protection (CBP) agents put her on a plane with dozens of people.

She spoke with other women who were traveling with their children and they agreed that perhaps they would be taken to Ciudad Juárez, Chihuahua. But it was not like that.

The young Honduran woman and other migrants traveled 2,500 kilometers to San Diego, California, to be forced to leave the United States after landing.

Title 42 is a public health measure, implemented by Donald Trump, as of March 2020, to contain the spread of the SARS-CoV-2 virus.

Under this program, CBP prohibits the entry of certain individuals who “potentially pose a health risk.” That implies all the people who enter the United States without immigration documents.

According to the Department of Homeland Security, those who cross the land borders irregularly “will be immediately expelled to the country of last transit”, that is, Mexico or Canada.

The Joe Biden government maintains the controversial program, although it has offered to suspend it. In any case, the damage is done.

Many were detained in states like Texas or New Mexico, then flown to cities like San Diego, California. From there they traveled by bus to the border with Mexico and were later handed over to the National Migration Institute (INM), as happened with Norma.

Thousands were virtually banished to Tijuana, where they set up camps in the streets and parks near the border wall.

The best known is El Chaparral, where thousands of migrants were concentrated for several months in overcrowded conditions, food problems and access to health services, according to the National Human Rights Commission (CNDH).

The camp was dismantled in February 2022. The 380 migrants who remained at the site were relocated to shelters. 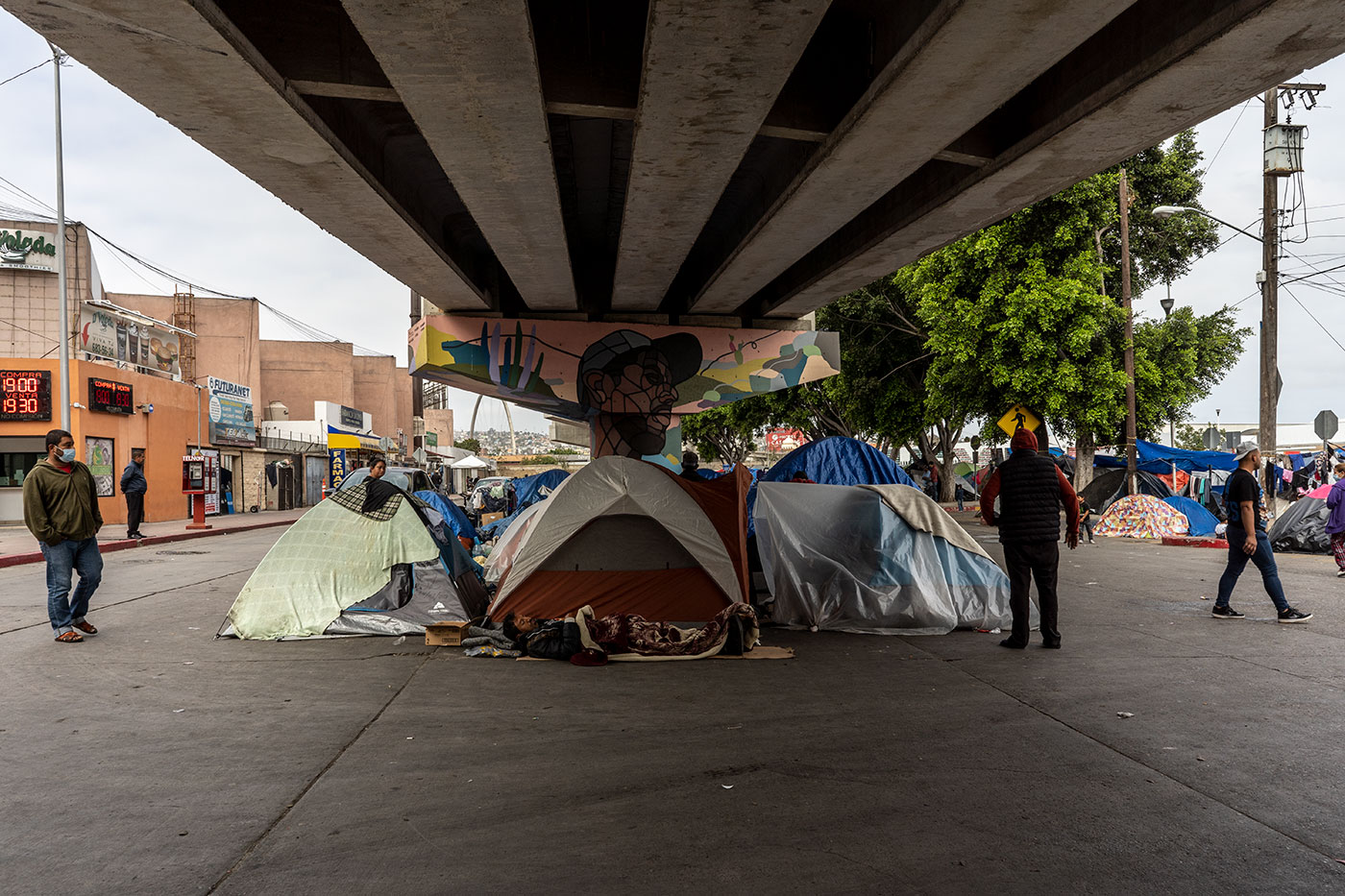 Expulsion by land is part of the Title 42 program. Another was the flights with migrants sent from cities like McAllen, Texas, to the Mexican southeast, specifically to Tapachula, Chiapas, and Villahermosa, Tabasco.

From those places, the INM completes the work and expels the passengers to Guatemala. With this express procedure, under the Title 42 decree, the right to request humanitarian asylum in the United States is denied, since, according to the immigration law of that country, to request that status it is an essential condition to be in US territory.

Being expelled completely cancels that possibility, as happened with Norma. The young Honduran remained stranded for several months in Tijuana, waiting for an opportunity to request humanitarian refuge, as she had intended when crossing the border through Texas.

The actions of the Biden government have been questioned by institutions, such as the International Organization for Migration (IOM), which interviewed more than a thousand people expelled from the United States under Title 42.

The results of that poll are published on the IOM Displacement Tracking Matrix platform, a system for tracking and monitoring the displacement of populations around the world.

In the case of people expelled by Title 42, the IOM detected that 50 percent of the affected people were Hondurans who fled their country, mainly due to “crime and the presence of armed persons” in their daily environments, as well as for extortion and “gender-based violence”. 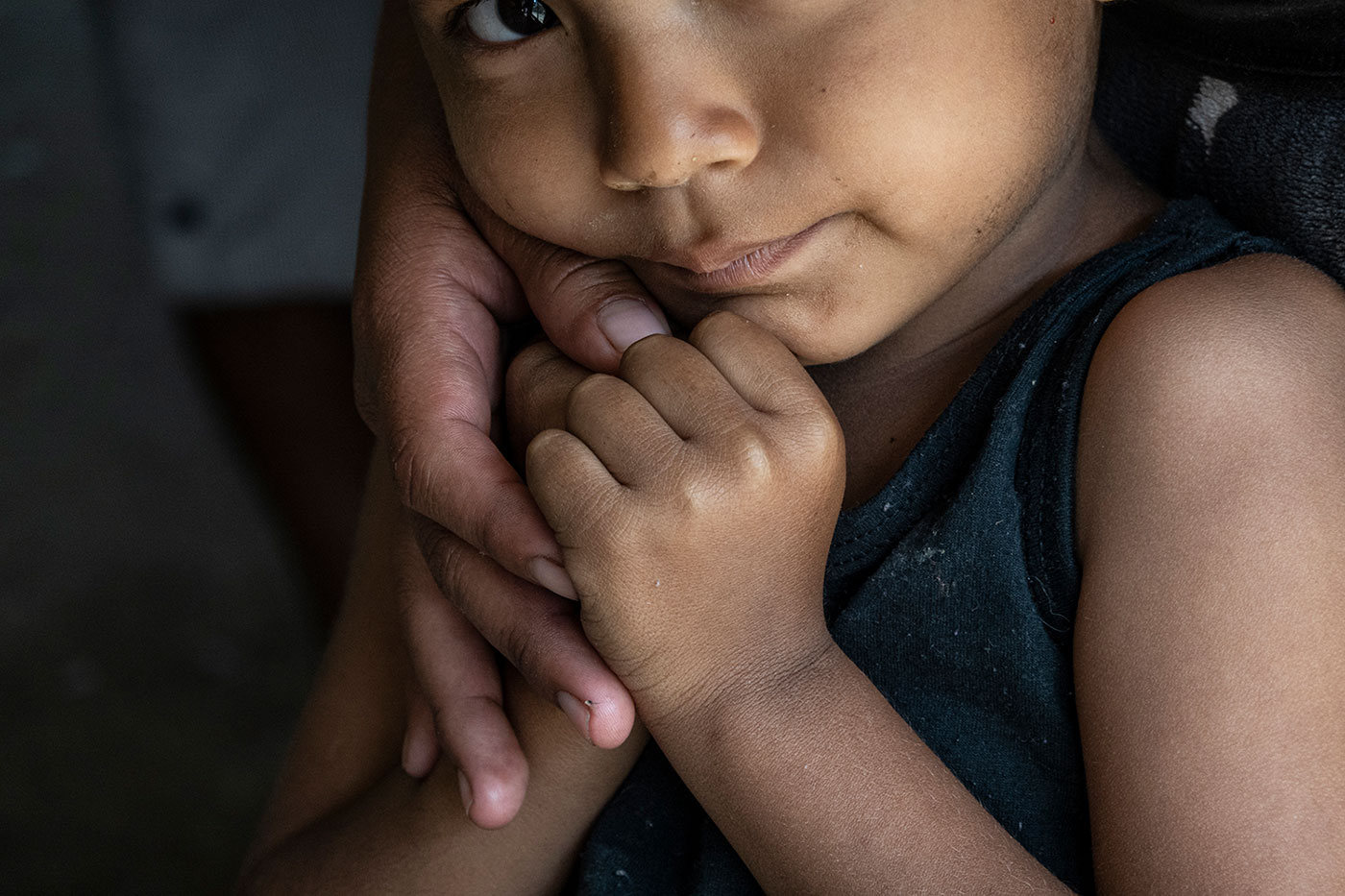 Norma thought that she and her baby could defend their request for asylum in the United States without being deported to Mexico. Photo: Duilio Rodriguez

“I have nothing to do in Mexico”

One of the most frequent complaints about the US government’s renewed expedited deportation strategy is that affected people are not duly informed about their legal status.

They are frequently deceived by CBP agents, denounce civil organizations. And what happened with Norma is an example: “They put us on the plane and there I asked an officer where we were going,” she said.

The officer replied that they were being taken to San Diego, California, to a processing center where they could call their relatives.

There, he thought, he could present his case for asylum. It was not possible. What the American officer had said before boarding the plane in Texas was half true: they were going to San Diego, but not to a processing center, but to the exit door of the country, literally.

Upon landing, “they put us on some buses. I told them I didn’t see any processing centers. I saw that they were returning us to Mexico. I have nothing to do there!” Norma said in a shelter in Tijuana.

In the chaos of the place where they were kept for several hours, Norma understood her harsh reality: weeks before she had entered the United States with her daughter through Brownsville, Texas, on the East Coast, and now she was expelled in San Diego, California, on the East Coast. West, 2,500 kilometers away.

Stepping off the plane, CBP officers told her that across the border she and her baby could make their refugee claim case.

It was a lie. “They told us that Mexico was allied with the United States and that they were going to treat us here,” Norma said.

“I told them that I needed my asylum application. They did not give me any document or procedure number.” Months later, the case of the Honduran migrant and her family finds itself in the same place as thousands of other people: in limbo.

The glen of various names

The Alacrán Canyon is a ravine on the outskirts of Tijuana, Baja California, a couple of kilometers from the wall with the United States.

On that site there is the Embajadores de Jesús temple, where Pastor Gustavo Banda Aceves sheltered some 100 Haitians who arrived in the border city in 2016.

They were part of a first wave of migrants from Haiti, who fled the economic crisis in Brazil, where they had taken refuge after the earthquake that devastated their country in 2010.

This first wave was followed by others and gradually the Cañon del Alacrán added a new name: Little Haiti.

The original inhabitants moved, some because they were able to cross the border and most because they found employment elsewhere. 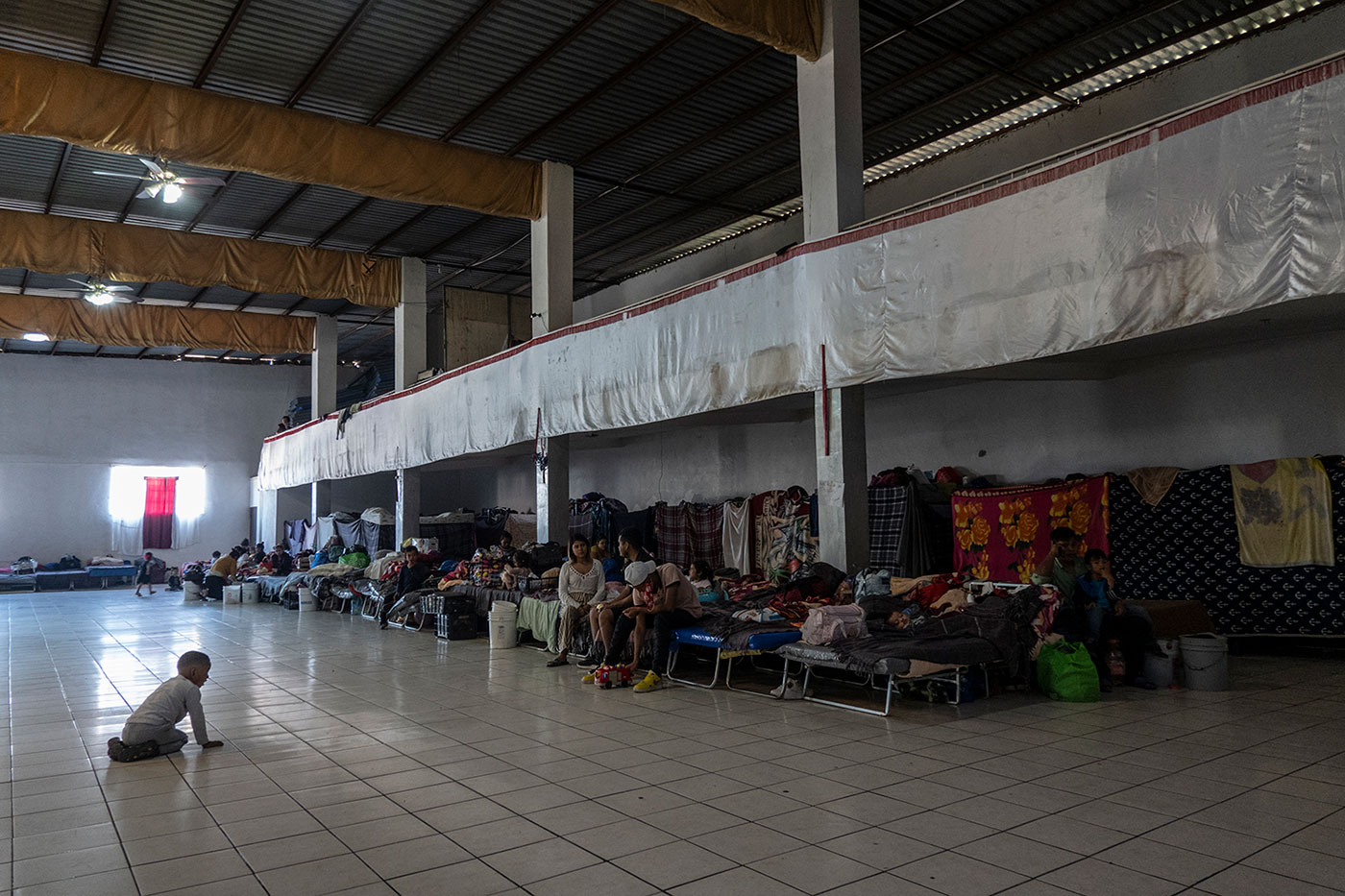 Embajadores de Jesús Temple, a place that houses hundreds of migrants who have been deported under Title 42. Photo: Duilio Rodríguez.

In recent years, the site has been occupied by migrants from Honduras, Guatemala and some from El Salvador. There are thousands, assures Pastor Banda. Now the canyon is known as The New Central America.

Norma arrived there after being expelled from the United States. For several months, he has been staying in a huge warehouse along with some 1,500 other Central Americans, waiting for a response about his legal situation and, above all, hoping to find a place where he can recover his life and that of his daughter.

A shared uncertainty that worsens with the passing of days.

“Nobody expected this when they started bringing people deported by Title 42. 130 people arrive daily at this place, plus all the ones I already have,” says Pastor Banda, while he observes the migrants who are in that large galley sleeping in mats and eating standing up.

Among them, the religious has found some patterns: there are those who still have money and go to other states to try again to cross the border. 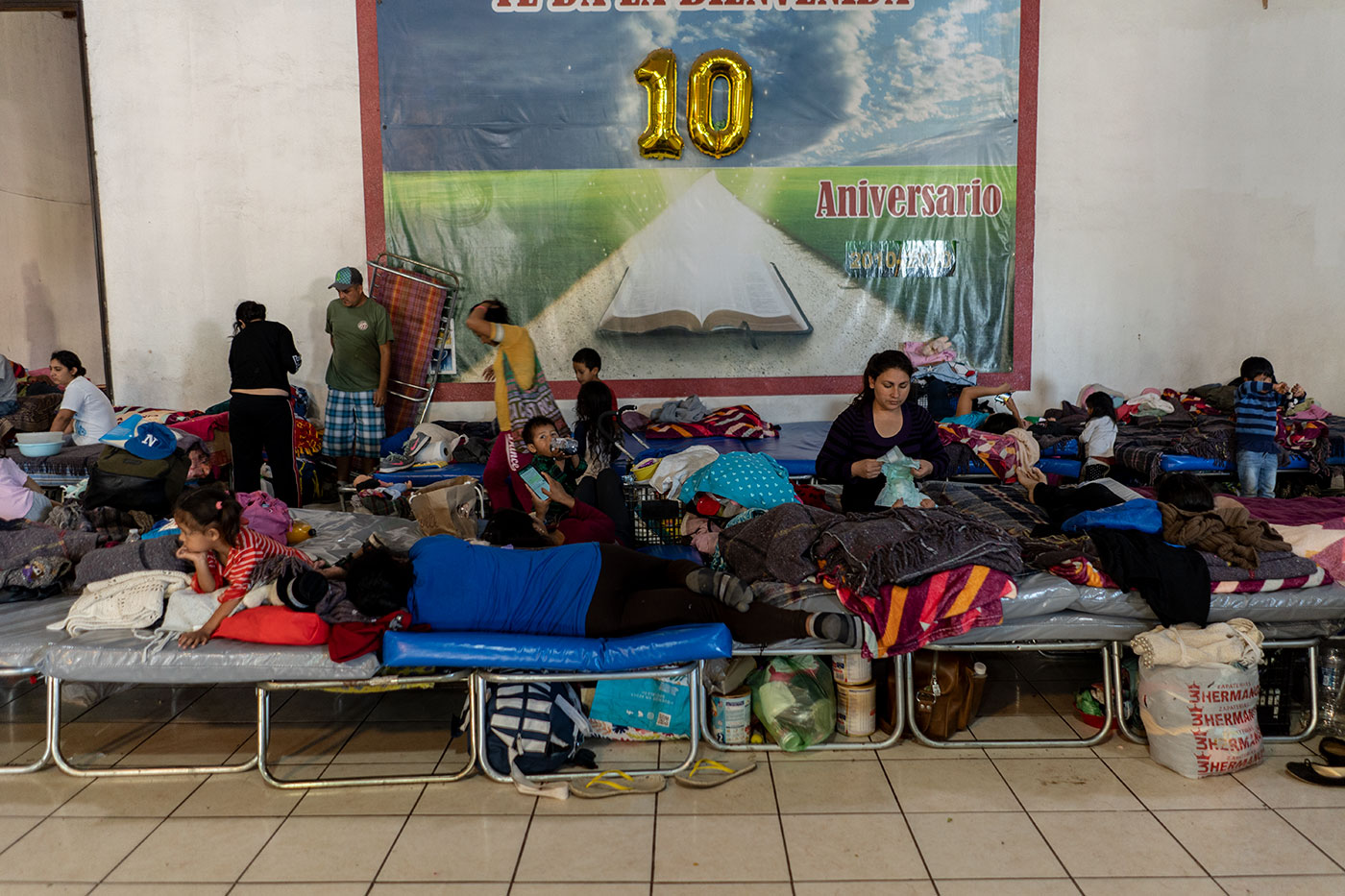 Embajadores de Jesús Temple, a place that houses hundreds of migrants who have been deported under Title 42. Photo: Duilio Rodríguez.

Others return to their country after several weeks of waiting and uncertainty, and those who stay because their lives are in danger in their place of origin, as is the case with Norma.

The situation is so serious that at times Pastor Gustavo Banda misses the Trump era and his programs like the MPP.

“At that time, when you least knew that people filled out an application, waited and as soon as they arrived, they went in an orderly way to cross the border.”

“Now everyone is deported,” with very little chance of reaching the United States. For them, Tijuana is the end of the trip.

For this report, the INM was asked for the number of people that Mexico received under the Title 42 program during 2021. However, the Institute replied that it does not have that information.