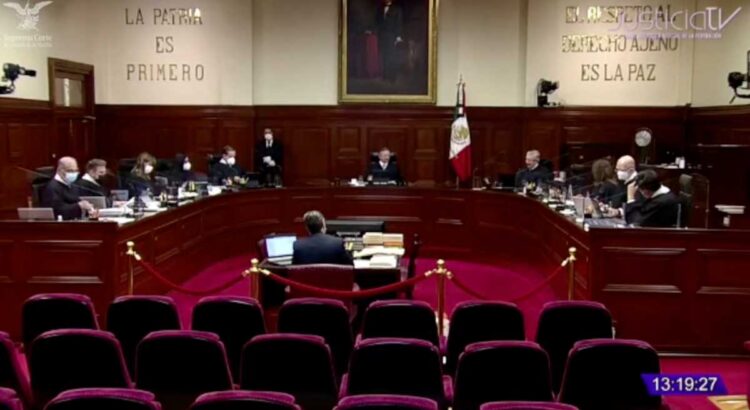 The Supreme Court of Justice of the Nation (SCJN) invalidated the reform to the Political Constitution of the State of Nuevo León that sought to protect the so-called “right to life” from the moment of conception, by reiterating that this type of modification to local legislation violates the right of women and pregnant people to decide on the free termination of a pregnancy.

In resolving two actions of unconstitutionality presented by the National Human Rights Commission (CNDH) and the State Human Rights Commission of Nuevo León (CEDH), the Plenary of the Court resolved that lThe Congresses of the 32 states lack the legal powers to legally define the origin of human life and to be able to define the concept of “person” from the moment the embryo is formed.

The sentence of the Supreme Court indicates that the definition of “person” and the exact moment in which it begins in life, is the exclusive faculty of the Federation, since both concepts must be regulated by the General Constitutionand therefore, these are legal modifications that can only be approved by the Congress of the Union.

Due to the above, 10 of the 11 ministers that make up the Plenary of the Supreme Court voted to invalidate the normative portion of article 1, second paragraph, of the Political Constitution of the State of Nuevo León, which argued to protect the right to life with the following fragment that the sentence transcribed verbatim in order to eliminate its content: “From the moment of conception he enters under the protection of the Law and is considered as born for all corresponding legal purposes, until his natural death.”

Thus, the Plenary Session of the Court reiterated a criterion that it had already adopted in other constitutional litigations in the sense that the states they lack the competence to define the origin of human life, the concept of “person” and the ownership of human rightssince this corresponds to an exclusive power of the federal legislator.

Similarly, the ruling concludes that the claim to grant the status of “person” to the embryo or fetus as the Congress of Nuevo León tried, actually wanted to justify the possibility that that state would approve in the future “Restrictive measures of the right to reproductive autonomy of women and pregnant people”, therefore, said norm was unconstitutional and contrary to the human rights of women.

“Although the product of gestation deserves protection that increases over time as the pregnancy progresses, this cannot disregard the rights to reproductive freedom and, in particular, the right to interrupt the pregnancy in certain cases”, stated in the Supreme Court ruling.

Due to the foregoing, the Supreme Court warns that the most congruent thing to defend the right to life of women who are in the process of gestation, is to give continuity and protection to the health of women and pregnant people with wanted pregnancies, taking care of prenatal care for all women living in Nuevo León and guaranteeing that mothers have access to healthy births.

Only under this optics, concludes the ruling, it will be possible to reduce maternal mortality and guarantee access to health for pregnant women or in the process of gestation.

“The claim to grant the status of a person to the embryo or fetus and, based on this, to adopt restrictive measures of the right to reproductive autonomy of women and pregnant people, was unconstitutional. According to precedent, Although the product of gestation deserves protection that increases over time as the pregnancy progresses, this cannot ignore the rights to reproductive freedom. and, in particular, the right to interrupt the pregnancy in certain cases”, concludes the sentence.

Only Minister Jorge Mario Pardo Rebolledo voted against said determinationbut he himself clarified that he did not do so because it was contrary to the reproductive rights of women, but because he did not agree with the arguments that relate this norm to future events, that is, with an eventual violation of the human rights of women. women, since the approval of this norm did not imply more restrictions for women to have access to the free interruption of pregnancy.