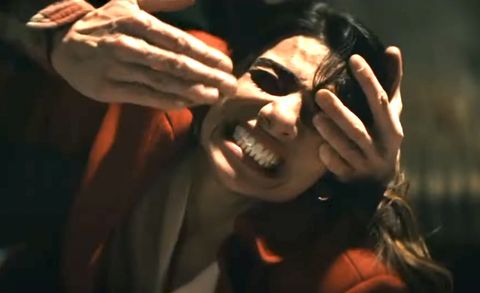 Here are spoilers for the third season of ‘The Boys’.

To star of ‘The Boys’, claudia doumit, they pulled out his hair during the filming of an explosive fight scene in the third season.

Near the end of the first episode, there is a scene where Doumit’s character, Victoria Neuman, is fighting someone from her past using her powers that allow her to explode heads. And so things get very dirty and bloody.

Claudia made some statements to DigitalSpy to talk about the new season, that intense first episode, and how those fight scenes went.

“It was crazy, but a lot of fun. If I remember correctly, that day I left the set without a single strand of hair, because there was a lot of bloodand in that scene we get very physical, and we move back and forth,” he laughs. “And so sometimes his fake blood is connected to my fake blood, and there’s a tear.”

But there’s absolutely nothing to worry about, because “it’s grown back. So we’re great. It’s fabulous.”

The long-awaited third season arrived on Friday, June 3 on Amazon Prime Video and, since its premiere, it has brought out all the heavy artillery.

Charlize Theronthe latest addition -thanks to the post-credits scene of ‘Doctor Strange in the multiverse of madness- to the ever-expanding Marvel Cinematic Universe, he makes a cameo in the first episode of the series.

And, according to series director Eric Kripke, he had no idea how big his appearance was going to be. “I think he thought he was going to stand in front of a green screen, say a couple of lines and that’s it. And we had built that whole set,” he confirmed to this medium.

The third season of ‘The Boys’ airs every Friday on Amazon Prime Video.

The Boys Omnibus Vol. 1 by Garth Ennis and Darick Robertson