Ghostbusters Animated Series in the Works at Netflix 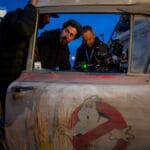 The “Ghostbusters” franchise is expanding into the animated realm. Again.

Netflix announced on Wednesday that the streamer and Sony Pictures Animation are developing an all-new “Ghostbusters” animated series to debut exclusively on Netflix. Jason Reitman and Gil Kenan, the filmmakers behind the recent live-action sequel “Ghostbusters: Afterlife,” will executive produce via Ghost Corps Inc.

Reitman and Kenan jump-started the “Ghostbusters” franchise anew with 2021’s “Ghostbusters: Afterlife,” a direct sequel to the original film and 1989’s “Ghostbusters II.” That story involved the estranged daughter and grandkids of Egon Spengler (played in the films by the late Harold Ramis) discovering a supernatural work that Egon left behind before his death. Bill Murray, Dan Akyroyd, Ernie Hudson, Annie Potts and Sigourney Weaver all made cameos.

A sequel to “Ghostbusters: Afterlife” is in early development at Sony, but no filmmakers are attached.

Reitman – the son of filmmaker Ivan Reitman who directed the first two “Ghostbusters” movies – conceived of the story for “Afterlife” with Kenan and the two are overseeing the future of Ghost Corps Inc., including this new Netflix animated series.

Sony previously attempted to revive the beloved franchise with the Paul Feig-directed 2016 film “Ghostbusters,” which was a soft reboot featuring an all-new cast. While the film grossed nearly $230 million worldwide, it proved divisive for the franchise’s opinionated fan base.

This isn’t the first time “Ghostbusters” has gone animated. “The Real Ghostbusters” ran from 1986 to 1991 and was followed by a sequel animated series in 1997 called “Extreme Ghostbusters.”

admin
See also  Stripe and the last dragon don't have a real villain, and it works