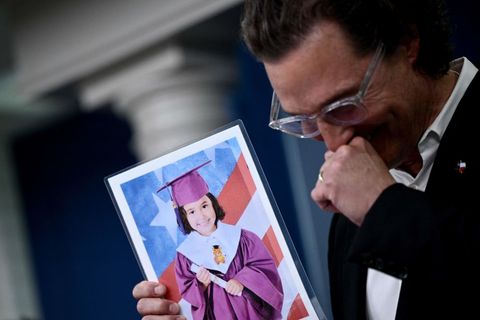 Matthew McConaughey is from Uvalde, Texas and about one in three Americans owns a firearm. He is also one of millions of citizens clamoring for a law restricting gun ownership. He thus expressed it in a heartbreaking speech in the press room of the White House where has detailed with Oscar-winning eloquence who some of the victims of the May 24 mass shooting at a Uvalde school were and might have been (number 212 of the year, according to Gun Violence). In total, 22 people died: 19 children, 2 teachers and the perpetrator of the massacre who committed suicide.

“We want safe schools and we want gun laws that don’t make it easy for bad guys to get the damn guns,” said the actor, who earlier this year considered running for governor of Texas. And it is that 20 years after the Columbine massacre, the numbers show that guns in America remain a deadly epidemic. You can watch his full 22-minute speech below:

McConaughey and his wife were in their hometown last week meeting with the victims’ families, sharing “tears, stories and memories.”, which he wanted to share with all Americans from the White House. In all cases they found the same “anger and confusion and sadness”, she said at the beginning of the speech, and the need to answer “how can they make the loss of these lives matter” (these lives mattersaid McConaughey in resonance with other social struggles in the country).

Before getting into the matter, he recalled how it was in Uvalde, where his mother worked in a kindergarten very close to the Robb Elementary school where the massacre took place, where learned how to handle a gun, got his license and understood what the responsible use of firearms was.

Then he began to talk about his meetings with the parents of the victims. she talked about Alithia Ramirez and her parents Ryan and Jessica. With a photo of Alithia taken a day earlier in her hand, McConaughey recounted that she was 10 years old when she was killed. “Her dream of hers was to go to art school in Paris and one day share her art with the world. Ryan and Jessica were eager to share it…they say showing it would keep her alive somehow.” McConaughey complied with her request by showing Alithia’s self-portrait with a friend of hers watching her draw from the sky.

Maite Rodriguez, was 9 years old when she was killed by one of the 393 million guns in the United States. She dreamed of being a marine biologist and was already consulting universities where she could enroll, “near the ocean.” “Maite cared so much about the environment that when her city asked her mom if they could release some balloons into the sky in her memory, her mom said, ‘oh no, Maite wouldn’t like to get dirty.’” Maite wore sneakers Green Converse, which she drew a heart on the toe of her right foot; McConaughey showed them off. It was thanks to those sneakers that her parents were able to identify her after the shooting. The effect of an AR-15 assault rifle – within reach and without controls of an 18-year-old boy – is so devastating that most of the 22 bodies had to be identified by such details or by DNA evidence.

ellie garcia, also 10 years old, also killed by a weapon within reach of anyone, had been preparing a passage from the Bible for a week that she was going to read at mass the next day. “She couldn’t get to read it,” McConaughey recalls before voicing Ellie’s passage.

He also talked about Irma Garciaone of the two teachers killed and whose husband died shortly after a heart attack.

Gun violence is the leading cause of death for those under 18 in the United States.with 18,000 children and adolescents killed or injured by gunshots each year (according to Every Town for Gun Safety).

Mathew McConaughey’s visit to the White House aims to put an end to this situation. Not banning guns, but restricting their access for “responsible ownership”. He believes that there is consensus in the United States regardless of the ideology of each one because those who own weapons are “fed up” with “disturbed individuals” abusing the Second Amendment of the Constitution that protects the right to arms. He says it is a “unique opportunity”.

To do this, in addition to his speech, McConaughey has briefly met with Joe Biden and several Democratic and Republican members of Congress.to help the bill to increase gun controls go ahead.

According to McConaughey, there are “reasonable and practical regulations” that could be passed, such as checking criminal records or increase the age of possession from 18 to 21 in a country where you can use weapons before you are of legal age to consume a beer.

He also acknowledges that this will not end mass shootings, but it will lessen the chances that these tragedies will happen as often. There’s still much to do:

Albert Hernando
Alberto writes about books, movies, series and the curiosities of our modern life.

admin
See also  R. Kelly's federal trial in Chicago is set to begin. Here's why he's back in court | CBCNews