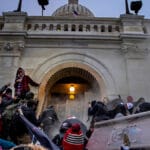 On Wednesday’s “The Late Show,” Stephen Colbert spent his monologue talking quite a lot about the upcoming congressional hearings over the Jan. 6 insurrection. And during this, he figured out a way to make people care about the hearings with a trailer ripped from Pro Wrestling or Monster Truck rallies.

Of course, by now you know these hearings into the deadly riot stoked by Donald Trump to overthrow the government in January, 2021, begin Thursday night in primetime and are scheduled to last two weeks. But as Colbert noted, a lot of media coverage has been less on the substance of the hearings and more about what it will take to get audiences watching.

And Colbert Agreed. “Here’s the thing. Hearings only matter if people are hearing them,” he said. “Which is why we here at “The Late Show” have put together a promo guaranteed to put asses in the TV seats.”

Then he ran the commercial, which you can watch above as part of the full monologue. But read on for the transcript.

“A constitution-crushing lineup of insurrectionist mayhem,” the ad continues, “featuring explosive revelations about: The Wine Gremlin; the Oxy Ogre; and… whoever the hell this is… bringing the pain to former president Schuckasaurus!”

Incidentally, those four referred to above were Rudy Giuliani, Steven K Bannon, Trump associate John Eastman, and of course Donald Trump himself.

“Need more to make you care about the fall of democracy?” the ad goes on. “OK, how about the thing you crave most: Another, even sadder season of ‘This Is Us.’ Every episode is a funeral!”

See also  The Expanse: Why Alex's Death Was the Best It Could Be

“Still want more? How about boobs! With 2-dollar gas. Only you can save democracy like the founders intended: By watching tv!” the ad concluded.

Watch the whole monologue above. The ad stuff kicks in just over a minute in.