REVIEW: MS. MARVEL Premiere Is Light On Action, But High In Character, Charisma, And Charm 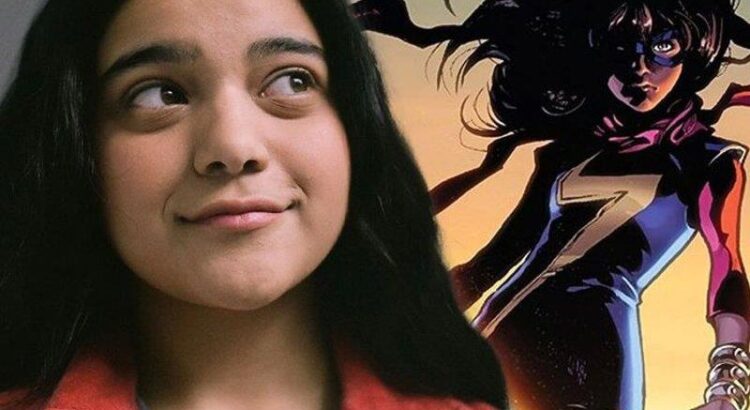 Kamala Khan has made the jump to the MCU at the Disney+ premiere of Ms Marvelbut does the show live up to the early online praise it’s received? spoiler ahead!

I am someone who, until recently, had only a passing knowledge of the character of Kamala Khan. I knew she was a young Muslim girl who had embiggening powers and idolized Carol Danvers, but that was about it. In preparation for this new series, I sat down and burned through G. Willow Wilson’s 19 issue debut run for Kamala, and what I discovered was a wonderfully complex character who can serve as a mirror for there of us.

Kamala is a nerd. Plain and simple. She is every one of us who has ever read a comic book and dreamed of flying, or having super strength, or saving the world. Every fanboy/girl can look at Kamala’s story of her and see someone like them who dreams of being a hero, who gets to live that dream, and inevitably finds that it’s far more complicated than she bargained for. After reading the book, I became instantly more excited for the show that had previously left me intrigued, if not exactly hyped.

Social media is now abuzz with reactions to the premiere episode of Ms Marvel, heaping praise on the show’s unique style, clever editing, and endlessly endearing young star. After watching the episode, I can confirm that the praise is 100% earned, and that Kevin Feige and Co. are looking at another certified hit to add to the MCU’s ever growing list of successes. They have perfectly incapsulated the character of Kamala, her personality of her, her fantasies, and the trials that she faces as she tries to find her place of her as a girl from two different worlds.

What sets this show largely apart from its MCU counterparts is the clever use of animation sprinkled throughout the episode. Kamala is a young woman with her head always in the clouds, and to illustrate this, her fantasies and conversations de ella come to life in the real world around her. Executive producer Bisha K Ali, along with premiere directors Adil El Arbi and Bilall Fallah, have crafted a vibrant and colorful world that still feels like a very real and lived in Jersey City. There is nothing bland or by-the-numbers about the feel and composition of Ms. Marvel so far, so those who find themselves growing tired of the “Marvel Formula” should be pleasantly surprised. The bike riding sequence and the Bruno/Kamala texting scene especially stand out, and the montage of Kamala illustrating her plan to sneak out to AvengersCon was incredibly well done and made the following depiction of the plan absolutely falling apart that much funnier.

The cast of the show is also perfect, from breakout star Iman Vellani (in her first acting role) to every member of her overbearing but deeply loving family, and even her school friends all delivering solid performances. For this being her freshman role, Iman cannot be praised enough for her amazing take on Kamala Khan. Iman is playful and lighthearted, but this betrays the turmoil and insecurities laying just beneath the surface. This is a character who finds herself conflicted between her Pakistani heritage and the western roots that she has established in America. She loves her family and culture but also feels as if she is missing out on some larger adventure by being restricted from embracing her American friends and interests of her. What probably helps Iman to capture the spirit of her character de ella so brilliantly is the fact that the actress herself is a Marvel fangirl at heart. She is a nerdy Muslim girl who is getting to live out her dream of becoming a superhero, just like Kamala. Iman is Kamala personified, to the point that Kevin Feige has confirmed that she would walk around set carrying a binder with notes and illustrations about the character and story.

Perhaps the most emotional moment in the show come when her parents attempt to compromise with Kamala about attending the 1st annual Avengers con, which Kamala desperately wants to attend despite her parent’s disapproval. Not at all a fan of Captain Marvel, Kamala’s Ammi (Urdu for Mother) creates a Hulk costume for her daughter de ella that is more in line with traditional Muslim garb. Furthermore, Muneeba (Anjali Bhimani) also creates a matching Hulk costume for Kamala’s Abbu (father) to wear. Marvel released this clip prior to the show’s debut, and it showed a lighthearted and fun scene in which a young girl is understandably embarrassed by her parents’ attempts to seem hip. What the show reveals to us after that moment is Kamala voicing her embarrassment of her and the outburst of her causing great pain to her parents of her, who genuinely love her and want to be a part of her life of her. The scene definitely changes course from silly to somber, and the performance by Muhan Kapur (Yusuf Khan) in this moment especially packed a punch.

Kamala’s family feels incredibly real and authentic throughout the episode. Her father de ella is a loving goofball, and while her mother de ella is more judgmental and harsh, she ultimately has her daughter’s safety de ella at heart. Even her ella brother Aamir (Played by Saagar Shaikh) shows a believable “I pick on you, but I have your back” older sibling vibe.

The show features several friends and classmates throughout the episode, but none of them really get much time to shine aside from Kamala’s bestie and eventual “Guy in the chair”, Bruno (played by Matt LIntz). In the comics, Bruno has been a close friend of Kamala’s de ella since they were toddlers and everyone around them can see how clearly in love he is with Kamala except for Kamala herself. They do seem to touch on this a bit in the premiere, as Bruno is clearly someone who is in Kamala’s corner no matter what and there was definite chemistry in their rooftop moment. His delivery of “You’re Kamala Khan. If you want to save the world… you’re going to save the world.” was positive proof of the high esteem in which he holds his friend / crush on him.

If there’s anything to complain about in this episode, it would be that there wasn’t much forward plot progression until the final few minutes. If you’re someone who loves slice-of-life superhero storytelling then this will not be a big flu at all, but if you prefer to the action and intrigue as fast as possible then this may have been a slower burn than you wanted. There’s also no real “Villain” to speak of in the premiere (save for school bully Zoe) as we establish Kamala’s world and the people there-in, but the episode’s mid-credit scene did set the stage for things to come and introduce a mysterious new group who has been made aware of Kamala’s powers.

See also  'I care a lot' about Netflix: 5 things it does better than 'Gone Girl' (and 5 things they miss the brand)

I do wish the episode had been a bit longer, as I feel the time between the first manifestation of her powers and the end of the episode moves a bit too quickly and doesn’t give any time for Kamala or Bruno to process what they’ go witnessed. Perhaps a brief scene of them on the bus back home, or even on their rooftop to marvel (heh) at Kamala’s new powers would have provided another good character moment.

The power change is certainly something that has been talked about ad nauseam both on this site and others and will likely continue to irk certain comic book purists. I was against the change at first myself and held out hope that Marvel may just be pulling a bait-and-switch in the marketing. Whether or not the change was necessary remains to be seen, but every other aspect of the character feels ripped straight from the comics, so they have earned a bit of good faith to tell their story in my eyes.

All-in-all, I feel like the show is off to a strong start and there is no ceiling in sight to limit its potential. I eagerly await episode 2 where we get to see more of Ms. Khan exploring her new powers de ella, the personal fallout de ella as she continues to defy her parents de ella, and the reveal of just who is after her de ella and her of her abilities of her.