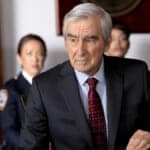 NBC announced on Monday that Mehcad Brooks is joining “Law & Order” for the procedural’s upcoming Season 22. The actor, who played Jimmy Olsen on The CW’s “Supergirl,” has been cast as a detective.

His casting comes after Anthony Anderson, who reprised his role of Detective Kevin Bernard for the Season 21 revival, announced he would not be returning to the series.

Although no description is available for Brooks’ character, he might be stepping in as the new partner to Jeffrey Donovan’s old school cop, Detective Frank Cosgrove.

Besides “Supergirl,” Brooks is known for her roles on ABC’s “Desperate Housewives,” “HBO’s True Blood,” and the USA sports drama “Necessary Roughness.”

His film credits include “A Fall from Grace,” “Nobody’s Fool,” “In the Valley of Elah,” “Just Wright,” and “About Last Night” opposite Kevin Hart, Michael Ealy and Regina Hall.

“Law & Order” is produced by Wolf Entertainment and Universal Television, a division of the Universal Studio Group.