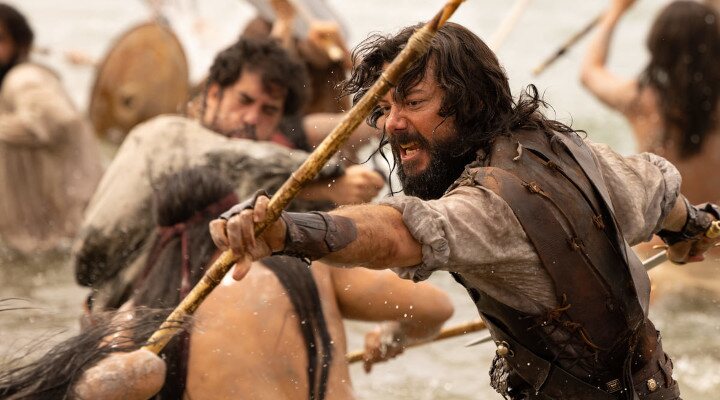 ‘Without limits’ is the new Spanish blockbuster on Amazon Prime Video that tells the story of how Juan Sebastián Elcano (Álvaro Morte) and Ferdinand Magellan (Rodrigo Santoro) proved that the Earth was round by going around the world while searching for a new trade route to the Indies. The series, which premiered on June 10, delves into one of the most iconic characters in the history of Spain. Morte, the person in charge of bringing it to life in this fiction, wanted to give it a twist that has not sat very well with everyone.

In an interview with The worldÁlvaro Morte has stated that the adventure narrated in the series demonstrates a lost spirit. “We should be a little more adventurous, a little more battle-hardened in general. It’s impressive that everything that’s going on in the world is going on and we’re only selectively getting on the ball.”. Perhaps this adventurous and groundbreaking spirit has been what has led him to shape his character. “To prevent them from appropriating it, what I have done with the character of Elcano is a very left-wing typewho always seeks consensus among his men, who pursues the common good and not his own good and who puts the big decisions he makes to a vote”.

It doesn’t rain to everyone’s liking

Reviewing historical figures with a current look is not something that pleases everyone. It is because of that The reactions to the actor’s statements have not been long in coming. Among the most notorious is that of the writer Arturo Pérez-Revertewho ironically maintains that Morte’s words encourage watching the series.

Encouraging to see her, come on. You get a crazy desire. pic.twitter.com/FHidWUauS6

Another of the viral reactions has been that of the journalist Juanma Rodríguez. “I believed that the obligation of an actor was to get into the character and not the other way around“he writes in a tweet that concludes by entrusting himself to Mel Gibson.

Álvaro Morte says that his Juan Sebastián Elcano is on the left and very committed. I believed that the obligation of an actor was to get into the character and not the other way around. Another one I don’t see, like that Cid from the operetta. Save us, Mel Gibson!

Another of the recurrent opinions has been that of the need for all Spanish products to be politicized. As is the case with this user. “Elcano lived long before the left or the right existed. This type of thing is an insult to the intelligence of the spectators, and the umpteenth proof of ideological fanaticism that discredits Spanish cinema”.

Elcano lived long before the left or the right existed. This type of thing is an insult to the intelligence of the spectators, and the umpteenth proof of ideological fanaticism that discredits Spanish cinema. pic.twitter.com/ECQOxW7hX1