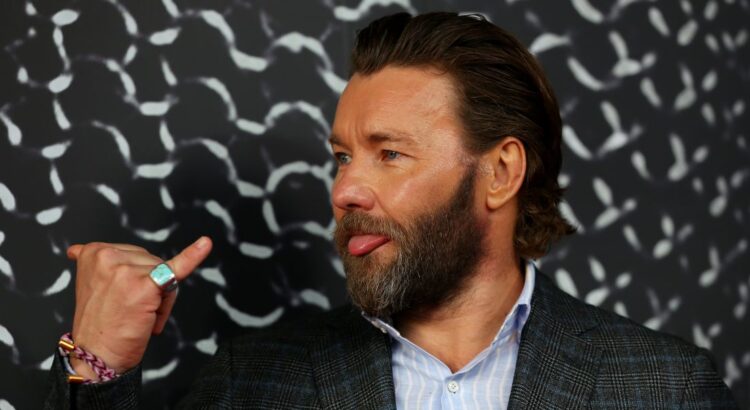 Twenty years after playing young Uncle Owen in ‘Attack of the Clones’ (2002), Joel Edgerton has returned to the Star Wars universe to open and close the ‘Obi-Wan Kenobi’ series on Disney+. At this time and based on supporting roles that included more and more phrases, Edgerton has ended up becoming one of the fundamental faces of today’s cinema, with a career where he has been able to intersperse great productions with interesting genre proposals.

Before traveling to Hollywood to be Luke Skywaler’s uncle, Edgerton, who was born in Sydney in 1974, He began his career on Australian television with series that are still remembered there as ‘Secret Lives’ (2001-2005). His first leading role was as an innovative shoe factory heir in the British comedy ‘Stomp’ (2005) and at that pace he has been walking the red carpet ever since.

By then it had been ten years since, in 1996, He had formed the Australian production company Blue-Tongue Films with his brother Nash and actors Kieran Darcy-Smith, Luke Doolan and David Michod.. Joel worked from the beginning on his brother’s first short films and together they have collaborated on each other’s films after Joel also jumped into directing. The result of this collaboration was ‘Gringo: Wanted alive or dead’ (2018), with Charlize Theron, one of the best thrillers on Amazon Prime Video that mixes action with comedy.

But before that, Joel had to carve out a niche for himself in front of and behind the cameras while his private life accelerated to the pace of a Hollywood star. 2011 marked his entry into the big leagues with the films ‘Warrior’ and the remake/prequel of ‘The Thing’. The old secondary Uncle Owen was now a former fighter in spectacular form returning to the fights to battle lanes with none other than Tom Hardy.

The following year ‘The Darkest Night’ -one of the best war films of the 21st century filmed by Kathryn Bigelow- and ‘The Great Gatsby’ confirmed him as an actor with a sense of elegance and action in equal parts and they deified him as Ramses II in ‘Exodus: Gods and Kings’ (2014) by Ridley Scott. With the confidence of having a settled acting career, Edgerton was finally able to fulfill his dream of directing ‘The Gift’, one of Blumhouse’s best films. Psychological thriller to chew the tension.

After that he has continued to collaborate with ‘Warrior’ director Gavin O’Connor, his brother Nash and Jeff Nichols and combining some of the best recent action movies like David Ayer’s ‘Bright’ with psychological thrillers like ‘ Red Sparrow’ by Francis Lawrence, major Australian productions such as ‘The King’ (one of the best Netflix movies), unclassifiable independent films such as ‘The Green Knight’ (2021, one of the best Amazon Prime Video fantasy movies) and his second film as director, ‘Identidad erased’, this time a drama about homosexuality in a religious environment.

This year, after the end of ‘Obi-Wan Kenobi’, we will see him in ‘The Stranger’, another Australian thriller in which he will once again have Sean Harris as his co-star, and Ron Howard’s true-life survival film ‘Thirteen Lives’ with Colin Farrell and Viggo Mortensen.

With just turned 48, Edgerton is currently working with two directors as independent and different from each other as Paul Schrader and George Clooney; with a thriller about a meticulous horticulturist for the former and a 1930s sports drama for the latter, an actor-turned-director like him.

Uncle Owen does not rest. We celebrate his longing for narrative with this review of his life and work in 35 photographs of a stellar career.

From Australian TV to American video

Joel Edgerton was born in Blacktown, Sydney, on June 23, 1974. The son of a housewife and a lawyer, acting was his obsession from a young age. He made his debut on Australian television with a couple of sporadic appearances in the series ‘The Law of the Bay’. That same year, in 1996, he appeared in the North American production ‘Race of the Sun’ with Halle Berry, James Belushi and Casey Affleck.

In 2001, the successful ‘Secret Lives’ began, an Australian series about a group of friends from a suburb of Melbourne where Edgerton plays one of the protagonists.

In 2002, and after attending the Australian People’s Choice Awards with this great hair, the actor left the series to try to start a career in the United States.

While trying to break into the industry, he kept working on small Australian projects. This image is from the 2005 Sony Tropfest Short Film Festival in Sydney where he attended as a cast member of ‘The IF Thing’, a short film directed by his brother Nash Edgerton.

In 2006 he starred opposite Joel Edgerton, Chiwetel Ejiofor in ‘Kinky Boots’, a comedy directed by Julian Jarrold.

Secondary under the sleeve

Together with Emily Browning at the premiere of ‘Ga’Hoole: The Legend of the Guardians’ (Zack Snyder, 2010), where they both voiced two leading owls.

In 2011, making fools of everyone at the GQ Australia Men of the Year Awards with an exemplary mustache.

In 2011 he achieved an interesting triplet by appearing in ‘Wish You Were Here’ (Kieran Darcy-Smith), the new ‘The Thing’ (Matthijs van Heijningen Jr.) and ‘Warrior’ (Gavin O’Connor), where he stood up to Tom Hardy. The image belongs to the meeting “Australians In Film” organized by Lionsgate.

Teresa Palmer, director Kieran Darcy-Smith, Joel Edgerton and Felicity Price posed so naturally at the presentation of ‘Wish You Were Here’ at Sundance.

Edgerton in the presentation of ‘Celeste And Jesse Forever’ (Lee Toland Krieger, 2012) with Elijah Wood, one of the secondary characters of the comedy starring Rashida Jones and Andy Samberg.

Along with Baz Luhrmann, walking up the steps of Cannes in the rainy presentation of ‘The Great Gatsby’.

Edgerton arriving at the Australian premiere of ‘The Crime Trail’ (Matthew Saville, 2013).

Together with Christian Bale and Ridley Scott in one of the international presentations of ‘Exodus: Gods and Kings’ (2014)

Edgerton and Bale attended the official pass for members of the academy of ‘Exodus: Gods and kings’ (Ridley Scott, 2014). It’s not one of Ridley Scott’s best films and it didn’t get any nominations, but Edgerton was a true Egyptian god.

Perhaps his appearance in the film was one of the reasons.

Edgerton next to a wax figure of Johnny Depp at the presentation of ‘Black Mass: Strictly Criminal’ (Scott Cooper, 2015) at the Venice Film Festival.

Edgerton presented his directorial debut for the first time in Los Angeles: ‘The Gift’ (2015).

At the press conference for ‘Black Mass: Strictly Criminal’ (Scott Cooper, 2015) in Toronto, he offered a hair spoiler that he would wear in ‘Loving’ (Jeff Nichols, 2016).

‘The Gift’ received good reviews and, incidentally, Edgerton won the award for best performance in Sitges.

Ruth Negga and Joel Edgerton at the photocall for ‘Loving’ in Cannes, before both were nominated for their work at the Golden Globes and Negga repeated tension on Oscar night.

Together with director Jeff Nichols and Ruth Negga, his partner in ‘Loving’, at the film’s premiere in Cannes.

Alongside Jessica Chastain at a party hosted by InStyle and the Hollywood Foreign Press Association, aka the Golden Globes types.

In the presentation of ‘Jane’s Revenge’, where he returned, he worked alongside Natalie Portman and repeated under Gavin O’Connor.

As a good Australian, Edgerton does not miss a wave.

Edgerton during his visit to Seth Meyers’ Late Night.

Also in 2017, he was one of James Corden’s guests. He coincided on set with Mark Wahlberg and Jeremy Renner.

In 2017 he continues to be involved in small productions with foundations such as ‘Llega de noche’ (Trey Edward Shults).

In 2018 comes his second film as director and screenwriter, ‘Erased Identity’, based on Garrard Conley’s memoirs and with Lucas Hedges, Nicole Kidman and Russell Crowe as protagonists.

Joel Edgerton returns to Star Wars, but this time he’s more than just a young Australian actor looking for a way to break into Hollywood.