The Old Man: That Emily Twist Explained by Writers 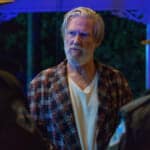 Through two episodes, FX’s “The Old Man” has made it a point to highlight how crucial the relationship is between lead character Dan Chase (Jeff Bridges) and his daughter, Emily. Dan’s refusal to relinquish that relationship, as Harold Harper (Jon Lithgow) instructed in the first episode, is the entire catalyst behind his current predicament — you know, the whole being hunted by the FBI thing. Yet it was curious that audiences have only been given Emily’s perspective of her through phone calls from her father’s point of view of her through the first two episodes.

As it turns out, there was a good reason for that. Tonight’s “critically important” reveals that Emily and Harold’s mentee, agent Angela Adams (played brilliantly by Alia Shawkat), are actually one in the same encapsulates the major themes of the series, according to the creatives behind it. Even more surprising than the twist itself is the fact that the idea behind it didn’t come until well into the season’s writing process as the decision-makers opted for a few stark departures from the 2017 novel of the same name.

“We didn’t know that in the writing of the first episode and we developed it internally,” executive producer Warren Littlefield told TheWrap. “When [writer] jon [Steinberg] first said that he was playing with the notion of Emily and Angela, we thought it was fantastic. We did n’t think we should be afraid of that beat because it also gets at the notion of two fathers in her life and those emotional relationships. Harold Harper is unbelievably vulnerable and attached to her. That adds a whole new dimension to this.”

In many ways, the Emily/Angela character is an amalgamation of those around her as she is so compartmentalized in two different identities that she risks losing herself entirely. It’s a core perspective of the show meant to not only heighten the spy thriller’s elements of espionage, but the emotional stakes of the character relationships and the show’s struggle with a sense of self.

“It’s a natural experience to have different relationships with your parents as a child than when you are an adult,” writer and co-creator Jon Steinberg said. “The idea of ​​fully splitting them into two different father figures was an interesting way of exploring that. And what does it do to her? What does it do to a person to have these two wholly different senses of themselves? And then, in a moment, somebody lifts the dam between the two of them and they start rushing into each other. It’s fascinating.”