Carmen Machi (‘Full of grace’): “Making movies is like football, we have to work as a team” 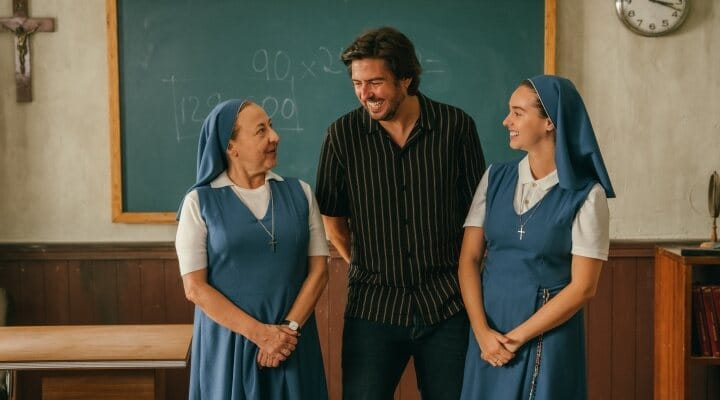 Carmen Machi puts on her robes in ‘Llenos degracia’. Family comedy with values ​​directed by Roberto Bueso that is in theaters from this June 24. Based on real events, by narrating the story of Sister Marina, who sought to help the El Parral school, which took in orphaned or fostered children, continue, it is a proposal that shows that cinema and football have much more in common than It seems. “Work as a team, both in a filming, as in a play or a football matchis essential and can only be achieved if everyone is united”says the actress.

Set in the summer of 1994 in El Parral, ‘Full of grace’ narrates the arrival at the center of Sister Marina, who must teach the children who have stayed at school during the summer season, these are children who lack legal guardians or who cannot be held responsible for them. The tape narrates how the encounter with the nun prompted football Valdo to dedicate himself professionally to the sportas well as the struggle of the nuns of the institution and the students themselves to prevent it from being dismantled as a reception center.

An incredible story that, as mentioned before, is based on real events. “The fact that this woman, Sister Marina, made this soccer team with kids who were having a hard time, as a way of connecting with them and injecting hope and transmitting values ​​to them, and that one of them made soccer his way of life, making his debut for Real Madrid and spending a good part of his career in the First Division is what surprises you and reminds you that reality is always stranger than fiction. But these stories happen, often anonymously, but, fortunately, they do happen.”, declares Bueso, director and co-writer of the film, in an interview granted to eCartelera in Madrid.

A comedy with values ​​for all audiences

Both for Machi and for the other actorsworking with the young leading talents, among whom Dairon Tallon, Adrián López, Pau Márquez, Adrián Marín, Diego Neira and Divine Ogbebor stand out, among others, has been “an enormous pleasure”. “I have felt very protected by my squad, it has been a gift. It is true that, a priori, when you feel that you have to work with a cast of so many kids, most of them have no experience or very little. But to me, that does not I don’t care, it’s going very well for me, because we all make pineapple together. according. The filming is happening and you get to know them better, they ask you where so much talent was stored. Knowing how to listen, forming a team, understanding other colleagues, respect, you discover authentic actors”shares Machi.