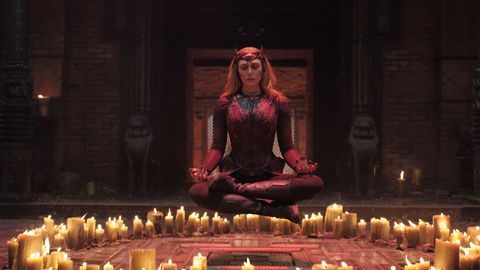 ‘Doctor Strange in the Multiverse of Madness’ has an important Scarlet Witch clue that you probably missed. The second solo installment of Doctor Strange follows Wanda Maximoff’s (Elizabeth Olsen) descent into darkness, following her afflicted control over the people of Westview in Scarlet Witch and Vision’ and her subsequent transformation into the Scarlet Witch.

Although Wanda is revealed to be the villain fairly early in the film, there were some hints that she had been pulling the strings all along from almost the beginning.

Before we found out that she was the one who sent Gargantos after America Chavez, one of those clues was that there was already a connection between Gargantos and Wanda right in front of our very eyes, literally.

“Fun fact about this Gargantos,” explained producer Richie Palmer. “In fact, we took the scan of Lizzie Olsen’s eyeball and had this eyeball modeled after Lizzie’s eye as a little foreshadowing of the real villain in the movie.”

Turns out we were looking Wanda in the eye the whole time.

Wanda’s controversial spiral into darkness left many fans divided, in part because at the end of ‘Scarlet Witch and the Vision’ it seemed like she could resolve their pain.

However, in the closing credits of the Disney+ series, Wanda was seen studying the Darkhold she got from Agatha Harkness (Kathryn Hahn). Screenwriter Michael Waldron said that was her biggest “mistake.”

“You see in the final scene of ‘WandaVision’ that cover: the mistake that our Wanda makes is that she opens the Darkhold,” he said. “She starts reading, and I think she feeds off her desire to have those children and to have them for real this time.

‘Doctor Strange in the multiverse of madness’ is now available on Disney + Spain.