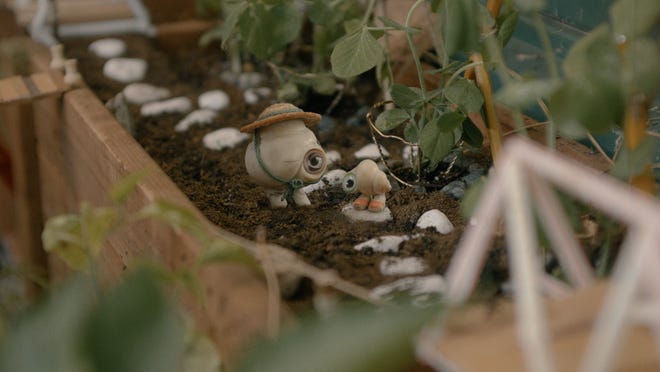 He may look like an adorable one-eyed mollusk, but “Marcel the Shell with Shoes On” is actually a Trojan Horse.

Adapted from the viral videos first released on YouTube in 2010, the stop-motion animated movie (now in theaters) follows a squeaky voiced, sneaker-wearing seashell named Marcel (Jenny Slate) who lives in a giant house with his grandma, Nana Connie (isabella rosellini).

Like the YouTube clips, the film delights in all the quirky ways that the 1-inch-tall Marcel inhabits the daunting human world: going fishing in a pot of soup, putting around in a hollowed-out tennis ball and curling up on his hoagie -roll couch to watch TV.

‘I Want You Back’:Jenny Slate says finding herself after motherhood ‘really caught me by surprise’

But underneath the seemingly cutesy concept is a much deeper story about community, loss and living with grief. At the beginning of the movie, we learn that Marcel once had a huge family, but they all mysteriously disappeared one day along with the homeowners. Marcel never had the chance to say goodbye, so he teams up with a documentary filmmaker (Dean Fleischer-Camp) who’s renting the house to start a social-media campaign to find them.

As this is happening, Marcel is attempting to care for his increasingly forgetful Nana Connie, who (as he puts it) “has lost a small piece of a very large puzzle.” As her memory of her fades and she gradually grows weaker, Marcel must come to grips with the fact that he may soon be alone.

With “Marcel,” Slate says she wanted to find a “careful, patient” way to discuss dementia, the realities of which can be difficult for many families to accept and navigate.

See also  10 Pokémon that take too long to evolve

“Whatever it is that you don’t want to talk about is probably what you should talk about. The dementia (storyline) is a good example, because there’s the question of, ‘How do you deal with it when only you and one other person remember this beautiful life that you used to have together?'” she says. “Marcel and Nana Connie are the only ones (left in the family who) really remember what it was like when their life was full and when it seemed like it would be that way forever.

“What happens when you start to separate, even in just your minds?” Slate continues. “For Nana Connie, she she’s just shedding those memories, and that is a type of departure that Marcel has to watch her make of her. It’s incredibly painful, and we wanted to be really honest about what that can look like.”

As it becomes more apparent that Nana Connie doesn’t have much time left, Marcel considers stopping the search for his family so he can look after her. His grandma counters, “Don’t use me as an excuse not to live.”

“But what if everything changes again?” Marcel asks tearfully.

It’s a devastating yet ultimately comforting reminder that “change is the only constant,” Slate says. “It’s a good thing to keep in mind, because it’s a relief. It lets you focus on other things you can control, rather than the giant hugeness of your own outcome.”

See also  Below Cover: What Has Stew Josiah Carter Been Up To Since Season 6?

It’s pretty existential territory for a movie about a talking shell, but it’s also the only way the team behind “Marcel” would’ve done it. Fleischer-Camp, who directed and co-wrote the film with Slate and Nick Paley, says there were early pressures from Hollywood execs to give the character a quippy, action-hero makeover.

“When the (YouTube) shorts took off, we met with all the studios and networks you’d expect,” Fleischer-Camp says. “It was clear they wanted to take Marcel out of his element: ‘How do we graft him onto a more familiar tentpole franchise or an action-adventure movie?’ There were a lot of ideas of partnering him with like, John Cena, and they fight crime together.”

The initial pitch meetings were “disappointing,” but eventually clarified the type of movie they wanted “Marcel” to be “I started thinking, ‘Marcel contains multitudes, and we don’t need to go broad. We can go small and search inward instead,’” Fleischer-Camp says. “I basically make movies to trick my military veteran dad into crying in public.”

Through the film, both Slate and Fleischer-Camp – who divorced in 2016 after nearly four years of marriage, but remain close friends and collaborators – were able to pay tribute to their own grandmothers. In fact, Marcel’s grandma is named after Slate’s Nana Conniequien appeared in the actress/comedian’s Netflix 2019 standup special “Stage Fright.”

“The character in the film is definitely an amalgam,” Slate explains. “My grandmother, Connie Gilson – who we call Nana Connie – is by far the kindest person I have ever met. She paid for my entire education, and when I decided to be a standup comedian who had no plan for how to actually make money, she was always on board for her however I was going to progress as a person.

“She’s an example of true goodness, so why not put that in a movie?”